Phoenix police said Thomas Wallace was being held Sunday on $1 million cash bond on suspicion of second-degree murder, concealing a dead body, theft of a pickup truck and trafficking in stolen property, while Romana Gonzalez is jailed on suspicion of fraud and theft. 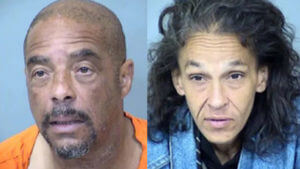 Authorities said Wallace, 58, had been a roommate of the victim and Gonzalez also stayed off and on at the home where the body was found. It was unclear Sunday if either has a lawyer to speak on their behalf. Police didn’t release the victim’s identity or the age of Gonzalez.

Officers entered the home Nov. 1 for a welfare check and reported finding two black trash bags inside a bedroom, along with severed body parts in a pile of blankets, according to court documents. Homicide investigators then discovered blood on the ceiling, walls and furniture, and the victim’s head in layers of linen.

The victim’s missing pickup truck was found at a motel down the street where Wallace and Gonzalez also were located and arrested Thursday, police said.

Wallace and Gonzalez are accused of pawning some of the victim’s items last month for $50, including a 10-inch saw that still had pieces of flesh in the chain, and a camera bag with the victim’s business card inside.

Ruby Lowry told Phoenix TV station KPNX that he was a good neighbor who would help anyone, and “he didn’t deserve that.”