NEW YORK (AP) — The October illegal campaign contribution trial of an associate of Rudy Giuliani — and a guilty plea set to occur this week by a second associate — puts a spotlight on Giuliani as a criminal probe of the former mayor and his dealings with Ukraine move closer to a decision on whether he’ll face arrest.

A judge last week refused to delay the Oct. 12 trial of Lev Parnas and Andrey Kukushkin on charges that they made illegal campaign contributions to U.S. politicians. Both have pleaded not guilty. 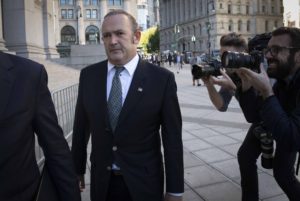 Meanwhile, a review of electronics materials seized in raids on Giuliani continues before prosecutors decide whether his dealings with Ukrainian officials while he worked as a personal lawyer for then-President Donald Trump required him to register as a foreign agent.

A decision on whether to charge Giuliani with a crime is unlikely to occur before a former federal judge finishes the court-appointed task of separating privileged materials from other data pulled from 18 phones taken during raids of Giuliani’s home and law office earlier this year. Some phones belonged to employees of the former New York mayor’s firm.

Igor Fruman, a Soviet-born Florida businessman who assisted Giuliani in seeking damaging information about Joe Biden in Ukraine when Biden was running for president, is scheduled to plead guilty on Friday in the illegal campaign contribution case.

Fruman and Parnas worked with Giuliani to try to convince Ukraine to open an investigation into Biden’s son, Hunter, over his connection to a Ukrainian energy company. When Parnas was arrested in October 2019, Democrats in the U.S. House were seeking his testimony about his involvement with Giuliani’s Ukrainian effort.

Giuliani, a Republican, has acknowledged working extensively with the pair in connection with Ukrainian figures but said he had no knowledge of any illegal campaign contributions.

Giuliani, who was widely praised for his actions as New York City’s mayor after the Sept. 11 attacks, has insisted his Ukrainian activities were conducted on behalf of Trump, not a foreign entity or person.

Trump’s efforts to press Ukraine for an investigation of the Bidens led the House to impeach Trump, though he was acquitted by the Senate. 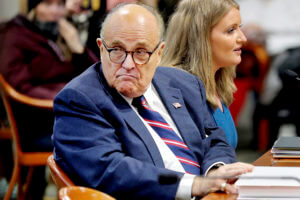 On Thursday, U.S. District Judge J. Paul Oetken in Manhattan rejected a request by lawyers for Parnas and Kukushkin to postpone next month’s trial, set to start October 12, until February.

Oetken noted that the trial was set to occur a year after it had been first scheduled and two years after the charges were brought.

“Further delay would potentially prejudice the Government in its ability to prosecute this case at trial, and it would undermine the public’s significant interest in timely resolution of these charges,” he wrote.

Parnas, a Soviet-born Florida businessman who came to the U.S. as a young child, and Kukushkin, a Ukrainian-born U.S. citizen, face trial in a scheme to make illegal campaign donations to local and federal politicians in New York, Nevada and other states to try to win support for a new recreational marijuana business.