DALLAS (AP) — Three Louisiana men are suspected in the killing of a witness who testified at the murder trial of a former Dallas police officer, authorities said Tuesday, cautioning that the killing had nothing at all to do with that trial or case.

The suspects — Jacquerious Mitchell, 20; Michael Mitchell, 32; and Thaddeous Green, 22 — are from Alexandria, Louisiana, and investigators believe they were in Dallas to buy drugs from Joshua Brown , Assistant Chief Avery Moore said at a news conference.

Moore said Jacquerious Mitchell told police that Brown shot him in the chest after Green and Brown began fighting during the drug deal, and that Green then shot Brown twice.

Jacquerious Mitchell is in a Dallas hospital in “critical condition,” police said. Neither Michael Mitchell, who is Jacquerious’ uncle, nor Thaddeous Green are in custody.

Green left with Brown’s backpack and gun, police said. Authorities confiscated 12 pounds (5.4 kilograms) of marijuana, 149 grams of THC cartridges and more than $4,000 in cash during a search of Brown’s home.

It is unclear how the three men came into contact with Brown or why they would have driven more than 300 miles (483 kilometers) from central Louisiana to purchase marijuana in Texas. 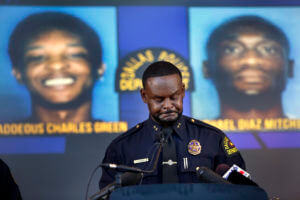 Dallas Assistant Chief of Police Avery Moore takes a moment to himself as he offers condolences to Joshua Brown’s family during a press conference about his death. Brown was killed in a drug deal gone bad. The police are still looking for suspects Thaddeous Charles Green and Michael Diaz Mitchell. They already have Mitchell’s nephew, Jacquerious Mitchell, in custody. Brown, who was a neighbor of Botham Jean at the South Side Flats, was also a character witness in the Amber Guyger trial. The press conference was held at Dallas Police Headquarters in Dallas, Tuesday, Oct. 8, 2019. (Tom Fox/The Dallas Morning News via AP)

The police announcement comes after rampant speculation regarding Brown’s death, which happened two days after a jury sentenced the white former police officer to 10 years in prison for killing her black upstairs neighbor in a case that sparked fierce debate over race, politics and policing.

Amber Guyger fatally shot Botham Jean in September 2018 in his fourth-floor apartment and testified that she mistook it for her own unit one floor below. She was arrested on a manslaughter charge three days after the killing, prompting criticism that the original charge was too lenient, but a grand jury later decided on the more serious charge of murder.

Brown, who was black, was one of several neighbors who were called by prosecutors to testify at the trial. The conspiracy theories surrounding his death underscored the distrust that some Dallas residents have for their police department.

“I have no reason to believe that their conclusions so far in the investigation are unreliable, but I believe … some members of the community will have a difficult time accepting it because of their association … with the Amber Guyger trial,” said Lee Merritt, attorney for the families of Brown and Jean.

But Moore, the assistant police chief, said Tuesday that it was reckless for people to speculate as to the circumstances surrounding Brown’s death, adding that it undermined the public’s faith in the department.

“As you know, there’s been speculation and rumors that have been shared by community leaders claiming that Mr. Brown’s death was related to the Amber Guyger trial and somehow the Dallas Police Department was responsible,” Moore said. “I assure you that is simply not true and I encourage those leaders to be mindful of their actions moving forward because their words have jeopardized the integrity of the city of Dallas as well as the Dallas Police Department.” 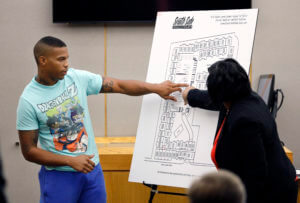 In this Tuesday, Sept. 24, 2019, photo, victim Botham Jean’s neighbor Joshua Brown, left, answers questions from Assistant District Attorney LaQuita Long, right, while pointing to a map of the South Side Flats where he lives, while testifying during the murder trial of former Dallas Police Officer Amber Guyger, in Dallas. Authorities say that Brown was killed in a shooting Friday, Oct. 4. (Tom Fox/The Dallas Morning News via AP, Pool)

Brown, who lived on the same floor as Jean, testified that on the night Jean was killed, he heard what sounded like “two people meeting by surprise” and then two gunshots. He said he had met Jean, a 26-year-old accountant from the Caribbean island nation of St. Lucia, for the first time earlier that day.

Merritt previously said Brown had had reservations about testifying in such a high-profile trial because he had been wounded in a shooting outside of a Dallas strip club last year. Police Major Max Geron said Tuesday that investigators have no evidence linking that shooting to Brown’s death.

Since the shooting, elected leaders have asked the public to refrain from speculating about the circumstances of Brown’s death. Mayor Eric Johnson on Tuesday thanked “everyone who demonstrated patience and responsibly reserved their judgment while” police investigated.

The Rev. Michael Waters, pastor of Joy Tabernacle African Methodist Episcopal Church in Dallas, who has pushed for police reform in the city, said the speculation around Brown’s death is driven by “generations” of mistrust for the police that’s grown out of wrongful convictions and abuse.

“There is cause for the community to be skeptical,” Waters said. “There is a lack of credibility that the Dallas Police Department currently has and, frankly, it’s not just among brown and black communities.” 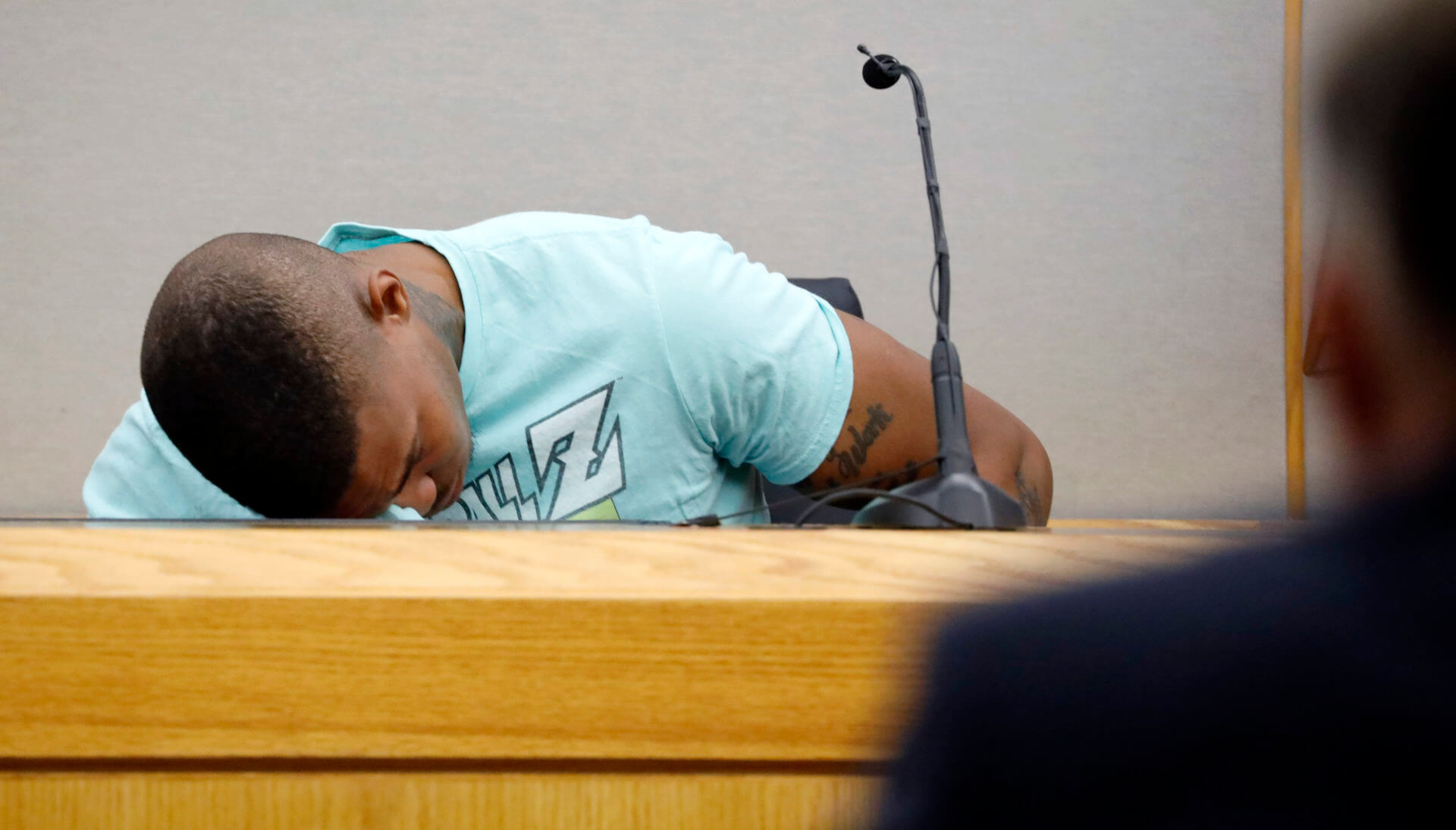 FILE - In this Tuesday, Sept. 24, 2019, file photo, Joshua Brown, a neighbor of victim Botham Jean, is overcome with emotion while giving testimony in court, in Dallas, after recounting how he'd heard Jean singing gospel and Drake songs across the hall before he was fatally shot. Authorities say that Brown was killed in a shooting Friday, Oct. 4. (Tom Fox/The Dallas Morning News via AP, Pool, File)
MORE NEWS