His name was Joseph Augustus Zarelli.

Nearly 66 years after the battered body of a young boy was found stuffed inside a cardboard box, Philadelphia police say they have finally unlocked a central mystery in the city’s most notorious cold case: The victim’s identity.

Revealing the name to the public Thursday, authorities hope it will bring them a step closer to the boy’s killer and give the victim — known to generations of Philadelphians as the “Boy in the Box” — a small measure of dignity. 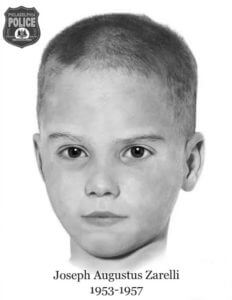 The city’s oldest unsolved homicide has “haunted this community, the Philadelphia police department, our nation, and the world,” Philadelphia Police Commissioner Danielle Outlaw said at a news conference.

“When people think about the boy in the box, a profound sadness is felt, not just because a child was murdered, but because his entire identity and his rightful claim to own his existence was taken away,” she said.

The homicide investigation remains open, and authorities said they hoped publicizing Joseph’s name would spur a fresh round of leads. But they cautioned the passage of time complicates the task.

“It’s going to be an uphill battle for us to definitively determine who caused this child’s death,” said Capt. Jason Smith, commanding officer of the homicide unit. “We may not make an arrest. We may never make an identification. But we’re going to do our darndest to try.”

Police said both of Joseph’s parents are dead, but that he has living siblings. They said his family lived in west Philadelphia.

The child’s naked, badly bruised body was found on Feb. 25, 1957, in a wooded area of Philadelphia’s Fox Chase neighborhood. The boy, who was 4 years old, had been wrapped in a blanket and placed inside a large JCPenney bassinet box. Police say he was malnourished. He’d been beaten to death.

The boy’s photo was put on a poster and plastered all over the city as police worked to identify him and catch his killer.

Detectives pursued and discarded hundreds of leads — that he was a Hungarian refugee, a boy who’d been kidnapped outside a Long Island supermarket in 1955, a variety of other missing children. They investigated a pair of traveling carnival workers and a family who operated a nearby foster home, but ruled them out as suspects.

An Ohio woman claimed her mother bought the boy from his birth parents in 1954, kept him in the basement of their suburban Philadelphia home, and killed him in a fit of rage. Authorities found her credible but couldn’t corroborate her story — another dead end.

All the while, the boy’s missing identity gnawed at police officials, generations of whom took up the case.

They got permission to exhume his body for DNA testing in 1998 and again in 2019, and it was that latest round of testing, combined with genetic genealogy, that gave police their big break. 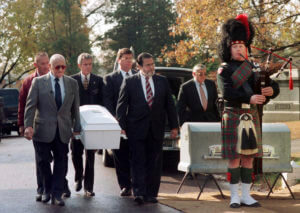 Philadelphia Police Officials act as pallbearers, and carry the coffin holding “America’s Unknown Child” to his gravesite before the start of graveside services at Ivy Hill Cemetary on Wednesday, Nov. 11th, 1998 in Philadelphia. The boy’s body was found almost 40 years ago in a box. The identity of the boy still has not been determined. (AP Photo/William Thomas Cain)

The test results were uploaded to DNA databases, allowing genealogists to make a match on the maternal side. Authorities obtained a court order for vital records of any children born to the woman they suspected was Joseph’s mother between 1944 and 1956, and found Joseph’s birth certificate, which also listed the name of his father.

William Fleisher, the co-founder of a group of professional sleuths called the Vidocq Society that took up the Boy in the Box case a quarter-century ago, said that hundreds of investigators had poured their “hearts and souls” into learning the boy’s identity and the circumstances of his death since 1957.

“Many of these men and women aren’t with us anymore, but I feel their souls are standing here at this moment with us,” Fleisher said at the news conference.

“Now our lad is no longer that boy is in the box. He has a name.”

Originally buried in a pauper’s grave, the boy’s remains now lie just inside the front gate at Ivy Hill Cemetery, under a weeping cherry tree, and a headstone designates him as “America’s Unknown Child.” Services have been held there each year on the anniversary of the boy’s discovery inside the box.

People often leave flowers and, this time of year, Christmas decorations and toys.

“The boy has always been special to all of us, because we don’t know who it is,” Dave Drysdale, the cemetery’s secretary-treasurer, said in a phone interview ahead of the news conference.

Now they do. And now that he has a name — his real name — it will be etched on the stone. 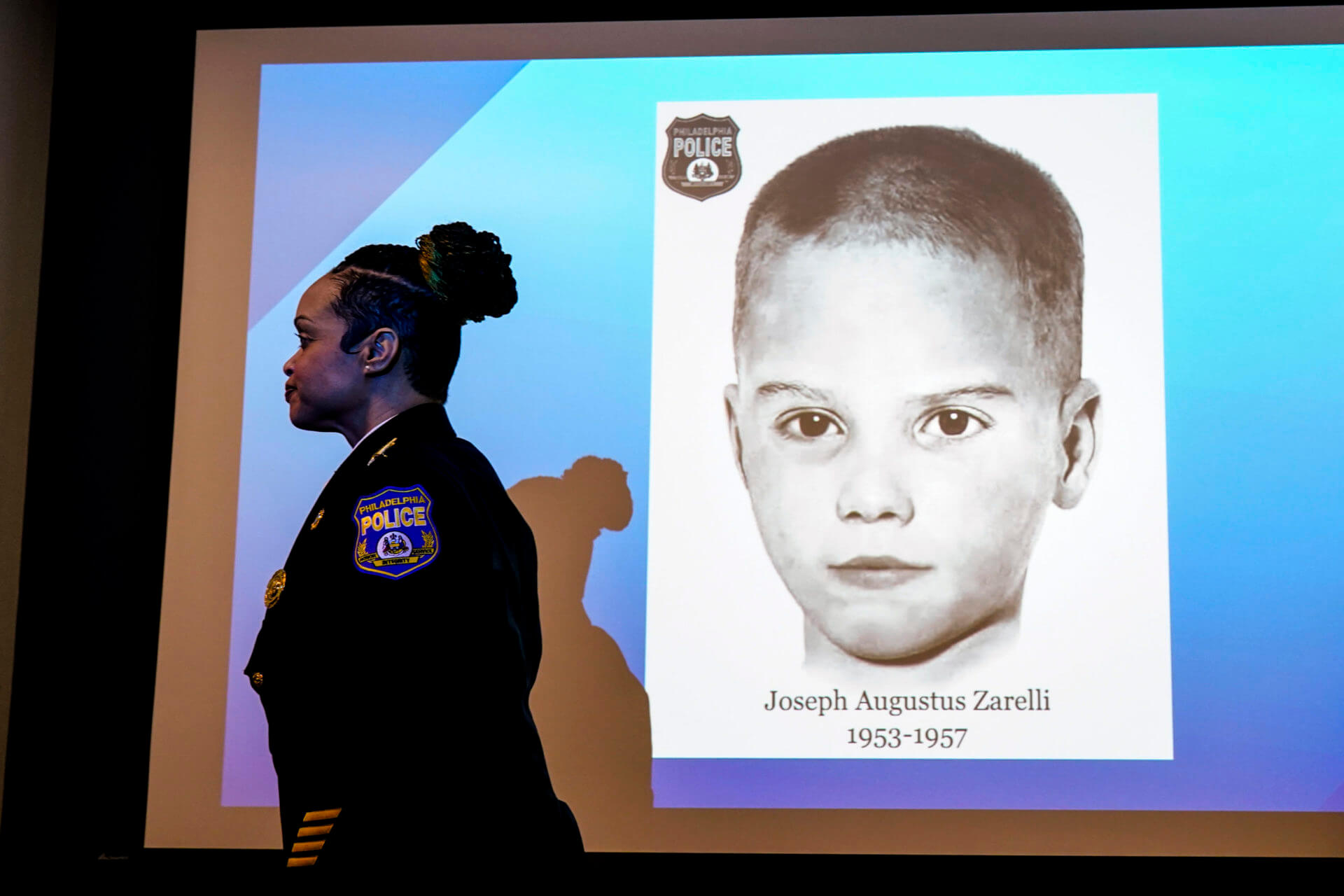 Philadelphia Police Commissioner Danielle Outlaw departs after a news conference in Philadelphia, Thursday, Dec. 8, 2022. Nearly 66 years after the battered body of a young boy was found stuffed inside a cardboard box, Philadelphia police have revealed the identity of the victim in the city's most notorious cold case. Police identified the boy as Joseph Augustus Zarelli. (AP Photo/Matt Rourke)
MORE NEWS