ROCKY RIVER, Ohio (SCRIPPS)— It’s now been two years since Carnell Sledge, 40, and Katherine Brown, 33, were shot and killed in a double homicide in the quiet Rocky River Reservation. Their killer is still on the loose, in spite of a reward that has grown to $100,000.

According to authorities, Sledge and Brown arrived at the parking lot around 5:04 p.m., got out of their cars and sat down together on a nearby bench. The two had been friends for more than a decade.

Despite the location being in a high-traffic area for both cars and people walking through, the shooter slipped away unnoticed, and there were no known witnesses to the crime.

In 2020, the Cleveland Division of the FBI told WEWS that the agency was joining the investigation because the deaths of Sledge and Brown “was such a heinous and violent crime in a public area.”

The FBI said the attack was done in a very brazen and specific manner and the agency has “no reason to believe it was random,” but it’s also not known the two were targeted. 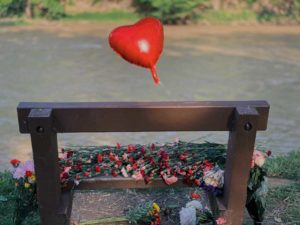 This photo provided by WEWS shows the bench where Katherine Brown and Carnell Sledge were sitting together before they were killed on June 4, 2019. (Emily Hamilton/WEWS)

Special Agent Vicki Anderson-Gregg said it was a busy day in the park on the evening Sledge and Brown where shot. The park was full of joggers, kayakers, bicyclists and people driving through.

“We just feel like somebody probably saw something,” Anderson told WEWS this week. “They may not even have realized that they saw, you know, whether it was a vehicle or person walking by or anything.”

A witness to the slayings could hold the key to solving the crime.

“We’re here two years later. That person could have a vital piece of information that we need,” Anderson said.

Prior to their deaths, the last time there was a homicide in the Rocky River Reservation was more than 20 years ago. Cleveland Metroparks rangers said the killings were an isolated incident and the overall safety of the parks isn’t in question.

According to Metroparks police, hundreds of tips have come into the agency, as well as to the FBI and CrimeStoppers, but nothing has panned out.

Richard McIntosh, who works with CrimeStoppers, said despite the killings, he doesn’t believe the park itself is dangerous.

“Does that mean they’re [the shooter] dangerous to the park system? No, because this person may never have come to the park system again,” McIntosh said. “But anybody who commits an act of violence certainly is dangerous and we want to get that person off the street.”

It’s been an ordeal for Brown’s family. After the killing, investigators touched base with the family to keep them apprised of the situation, Brown’s sister Alex Zuban said. But as time went by, communication got fewer and farther between—because investigators were running out of data and tips to comb through.

“When they actually had data to give us, they would call us, but then as time has gone on it has slowly gotten more and more quiet,” Zuban said.

Zuban still feels the pain of losing her sister.

“You deal with the pain, but it never, ever, ever ceases to feel. It takes your breath away,” she said. “Missing Kate. It hits you every single day. You’ll just be going on with your life and all of a sudden the memories are back.”

Zuban continued, “Remembering that this happened and that she will never be at a family party again or you can’t call her. It’s the worst feeling in the world and I wouldn’t wish that on anyone.”

Brown’s family said they will never stop trying to figure out what happened and who did it.

“There are just so many unknowns and I think that’s what’s the hardest part of all of this. You just don’t know,” Brown’s older sister Lauren Rao said.

How someone could get away with murder in broad daylight is a mystery Brown’s family is still trying to wrap their heads around. 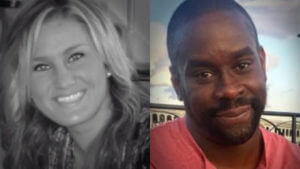 This combination photo provided by WEWS shows Katherine Brown (L) and Carnell Brown (R), who were killed June 4, 2019. Their killer is still on the loose. (WEWS)

“There’s no evidence and there hasn’t been a single suspect. No suspect. No getaway car. No evidence. No weapon,” Rao said. “Whoever committed this crime either is the luckiest person in the world or executed this perfectly.”

“A beautiful sunny day and nobody heard a thing? Nobody saw anything? It was right at rush hour, right when cars are just coming through one right after the other,” she said.

“Someday we will get justice. I know deep down that it will happen,” she said.