DETROIT (AP) — A 19-year-old man suspected in the random shootings of four people, three fatally, was captured after a tip from someone close to him, police said Monday.

Chief James White also said that the man may have been suffering from mental illness, though he said an investigation is still underway into a motive for shootings that erupted early Sunday and fueled anxiety across the city until the man was captured later that evening. 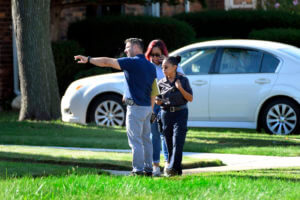 Detroit Police and investigators look over a shooting scene on Pennington Drive, north of Seven Mile Road, Sunday, Aug. 28, 2022, in Detroit. Four people were shot, with fatalities, by a person who appeared to be firing at people randomly over a roughly 2 1/2-hour period Sunday morning in Detroit, police said. (Jose Juarez/Special to Detroit News via AP)

Police said the first shooting came at 4:45 a.m. when a 28-year-old man was shot by an assailant without provocation, with the shooter walking away, then coming back and firing more shots into the victim.

About 30 minutes later and three blocks away, police got their first 911 call for shots fired and found a woman in her 40s on a sidewalk suffering from gunshot wounds. A third victim, a woman in her 40s waiting for a bus a short distance away to the east, was shot soon after.

Police said they realized they were dealing with an essential active shooter situation with 9mm shell casings at each site that they quickly established came from the same gun. They said when they arrested the suspect, they quickly matched a gun recovered from him with the casings, making them confident that “the suspect we have in custody is our suspect,” White said. 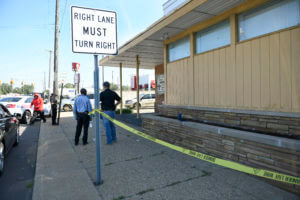 Detroit Police and investigators look over a homicide scene on Wyoming Avenue, near the corner of Seven Mile Road, Sunday, Aug. 28, 2022, in Detroit. Four people were shot, with fatalities, by a person who appeared to be firing at people randomly over a roughly 2 1/2-hour period Sunday morning in Detroit, police said. (Jose Juarez/Special to Detroit News via AP)

“The shootings touched the hearts of everybody in the city, innocent people going about their lives on a Sunday morning, being shot for no other other reason than being in the wrong place at the wrong time,” Mayor Mike Duggan said.

A 76-year-old man said he saw a man peering into vehicles. When he told the suspicious person to get away from the cars, the gunman fired at him, police said. He survived.

Duggan credited “critical information” from the community and multiple law enforcement agencies with helping police take the suspect into custody.

“As we mourn our three neighbors who were killed, we should take the time to appreciate all the men and women in law enforcement whose work today made sure no other families will suffer at the hands of this shooter,” Duggan said.