If a Los Angeles prosecutor keeps exposing lies Durst told over the years, the New York real estate heir on trial for murder may wish he hadn’t taken a chance to appeal directly to jurors in his bid for acquittal.

Durst testified under cross-examination Tuesday that he lied under oath in the past and would do it again to prevent incriminating himself. But he said he hadn’t lied — at least up to that point — during his five days of ongoing testimony in Los Angeles County Superior Court.

Under questioning from Deputy District Attorney John Lewin, who relished the prospect of grilling Durst and prepared a 200-page outline for questioning, the multimillionaire acknowledged there are some acts he would never come clean about.

“If you’ve said you’ve taken an oath to tell the truth but you’ve also just told us that you would lie if you needed to, can you tell me how that would not destroy your credibility?” Lewin asked.

“Because what I’m saying is mostly the truth,” Durst said. “There are certain things I would lie about, certain very important things.”

Durst said he would never admit killing Susan Berman — even if he had done so.

Durst, 78, has pleaded not guilty to murder in the point-blank shooting of Berman, his longtime confidante, in her Los Angeles home. Durst said he found a lifeless Berman lying on a bedroom floor when he showed up for a planned visit just before Christmas in 2000.

Playing clips of interviews Durst gave filmmakers, an interrogation conducted after Durst’s arrest in New Orleans in 2015, and clips from his testimony, Lewin got Durst to admit several lies he told over the years.

Prosecutors say Durst silenced Berman as she prepared to speak with New York authorities about the disappearance of his wife, Kathie, in 1982 and how she provided a false alibi for him. They also say he murdered a neighbor who discovered his true identity when he was hiding from authorities in Galveston, Texas, in 2001.

Robert Durst has never been charged with a crime in his wife’s disappearance and has denied killing her.

He was acquitted of murder in Morris Black’s death after he testified he fatally shot the man during a struggle for a gun. He was convicted of destroying evidence for chopping up the man’s body and tossing it out to sea.

If he had killed his wife and murdered Morris Black, Durst said he wouldn’t admit those crimes.

Testifying at trial is incredibly risky for a defendant, and most lawyers won’t put their clients on the stand. Durst’s testimony Tuesday showed that a history of lies and inconsistent stories had made him vulnerable.

“You don’t just make up lies for the sake of lying,” Lewin said. “You lie in particular when there is a reason for you to lie. And, generally speaking in this context, when it relates to incriminating evidence, correct?”

In questions from his own lawyer, Durst said he had not confessed to any killings when he was captured speaking to himself on a live microphone after filming a documentary about his life and the deaths of people close to him. 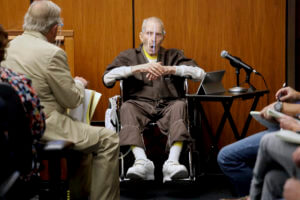 New York real estate scion Robert Durst, 78, answers questions from defense attorney Dick DeGuerin, left, as he testifies in his murder trial at the Inglewood Courthouse on Monday, Aug. 9, 2021, in Inglewood, Calf. Durst is charged with the 2000 murder of Susan Berman inside her Benedict Canyon home. He testified Monday that he did not kill his best friend Berman. (Gary Coronado / Los Angeles Times via AP, Pool)

In the climactic scene of “The Jinx: The Life and Deaths of Robert Durst,” he could be heard in a bathroom muttering: “What the hell did I do? Killed them all, of course.”

Durst, who had just been caught on video in a lie about a note directing police to Berman’s “cadaver,” explained that the mic hadn’t captured his full thought.

“What I did not say out loud or, perhaps I said very softly, is: ‘They’ll all think I killed them all, of course,’” he testified.

Many viewers interpreted the remarks, which were edited together by the filmmakers for a dramatic conclusion to the six-part HBO series, as an admission.

Authorities arrested Durst the night before the finale aired in March 2015 because they expected him to flee after the “gotcha” moment and the unexpected dialogue that followed.

Durst testified he had been planning to kill himself with a gun when FBI agents apprehended him in the lobby of a New Orleans hotel, where he was registered under an alias.

When pressed by Lewin about the note, Durst said he had to lie because otherwise it was clear he was present when Berman died.

“Well, it’s worse than that,” Lewin said. “You previously said on multiple occasions that quote, ‘That’s a note only the killer could have written.’”

Durst said it was a line fed to him by the film’s producer that he repeated again in an interrogation in 2015 by Lewin.

“Seriously?” Lewin said in a comment stricken from the record after an objection from the defense.

Durst reached out to filmmaker Andrew Jarecki in the hopes of burnishing his reputation after becoming a pariah following the Texas case.

Despite being the scion of a New York developer, he was rejected by condominium associations in New York, Houston and California, he said. The Los Angeles County Museum of Art wanted him to make a donation anonymously.

Jarecki had made “All Good Things,” a feature film based on Durst’s life starring Ryan Gosling and Kirsten Dunst.

Despite advice from his lawyers and “everybody” not to give a series of interviews for the film project, Durst ignored them all.

He said he was high on methamphetamine and repeatedly lied during the interviews. He had assured Jarecki he was being honest because things would go “very, very wrong” if he wasn’t truthful.

When Lewin suggested that his lies to the filmmakers and at trial were coming back to haunt him, Durst said only that everything he did with Jarecki was a mistake.