WALTERBORO, S.C. (AP) — As prosecutors and defense lawyers prepare to choose a jury for South Carolina attorney Alex Murdaugh’s murder trial, a judge decided to wait until the issues come up at trial to decide whether jurors hear evidence about blood spatter or other crimes Murdaugh is charged with.

Prosecutors want to present voluminous evidence of Murdaugh’s bad behavior and the numerous crimes he is charged with to show he killed his wife and son to buy time to prevent his other wrongdoings from being discovered. Defense attorneys don’t want the judge to admit the evidence, contending prosecutors are trying to smear Murdaugh to bolster a weak case.

Circuit Judge Clifton Newman told the attorneys Tuesday that he will decide on a case-by-case basis outside the jury’s presence.

Also Tuesday, Murdaugh’s lawyers agreed to wait and see if prosecutors decide to bring to the stand an expert who wrote a report saying blood from his slain younger son spattered on Murdaugh’s shirt. Defense lawyers said the shirt was destroyed before they could test it and there is evidence the expert examining the shirt changed his conclusions under pressure from state agents. 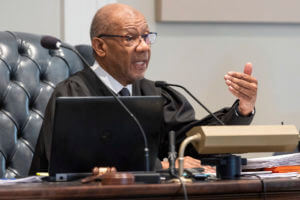 Circuit court judge Clifton Newman explains disqualifying criteria to potential jurors as jury selection continues in the Alex Murdaugh murder trial at the Colleton County Courthouse in Walterboro, S.C., Tuesday, Jan. 24, 2023. Murdaugh, 54, faces 30 years to life in prison if convicted of murder in the deaths of his wife Maggie, 52, and their son, Paul, 22. (Joshua Boucher/The State via AP, Pool)

The judge denied a request Tuesday by Murdaugh’s lawyers to prevent an expert from testifying that rifle cartridges found near his wife’s body have marks indicating they may have been fired from the same gun that fired other cartridges found at a shooting range on the property. Prosecutors said a similar model gun remains missing from the Murdaugh home.

The defense said recent scientific advances show ballistics experts can’t say with 100% certainty that there are unique markings linking a gun to a cartridge. Prosecutors said this kind of evidence is allowed in courtrooms all the time. Newman said defense lawyers can question the expert during cross examination.

Prosecutor Creighton Waters asked for a ruing before the jury was seated, likely because he wants to mention the evidence in his opening statement.

Jury selection continued Tuesday as the court finished whittling down the 900 people sent summons to a pool of more than 120 potential jurors. Eighty of them will be brought to court Wednesday morning to select the final panel of 12, plus six alternates.

Murdaugh, 54, faces 30 years to life in prison if convicted of murder in the deaths of Maggie, 52, and their son, Paul, 22. Murdaugh told investigators that he found their bodies outside their Colleton County home on June 7, 2021. He said he’d been gone for about an hour to visit his ailing father and mother.

Murdaugh also faces about 100 charges related to other crimes, including money laundering, stealing millions from clients, tax evasion and trying to get a man to fatally shoot him so his surviving son could collect a $10 million life insurance policy. He was being held in jail without bail on those counts before he was charged with murder. 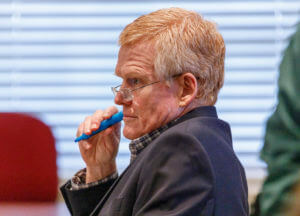 Alex Murdaugh waits during a break in the jury selection process on the second day of jury selection at his trial at the Colleton County Courthouse in Walterboro, S.C., Tuesday, Jan. 24, 2023. Murdaugh, 54, faces 30 years to life in prison if convicted of murder in the deaths of his wife Maggie, 52, and their son, Paul, 22. (Joshua Boucher/The State via AP, Pool)

Usually, the prosecution’s key evidence is known well beforehand in prominent South Carolina trials, whether it’s Susan Smith’s confession that she rolled her car into a Union County lake and drowned her children or surveillance footage showing Dylann Roof with his distinctive haircut enter and exit a Charleston African American church where he killed nine members in a racist attack.

But little is known about the state’s case against Murdaugh outside of the disputed blood spatter evidence, subpoenas of Google and Snapchat and mentions of videos taken at the Murdaughs’ home where the killings took place.

Court papers filed by the defense this week included a crime scene report detailing that Maggie Murdaugh was shot at least four times and appeared to be moving when she was wounded and Paul Mudaugh was shot twice, once with buckshot and once with smaller birdshot. Both were killed by shots to the head.

When asked during a preliminary hearing about what evidence they would produce, prosecutors presented a detailed timeline of how Murdaugh’s wife and son were killed the same day a paralegal at a law firm reported he might be stealing money.

They contend Murdaugh shot the two to distract attention from his financial jam and that evidence of other crimes on which he is awaiting trial is relevant to illustrate how a father and husband could commit such a horrible act. 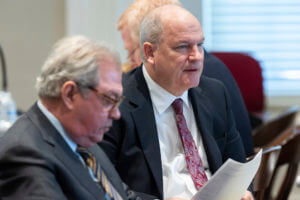 Jury selection continues in the Alex Murdaugh murder trial at the Colleton County Courthouse in Walterboro, S.C., Tuesday, Jan. 24, 2023. Murdaugh, 54, faces 30 years to life in prison if convicted of murder in the deaths of his wife Maggie, 52, and their son, Paul, 22. (Joshua Boucher/The State via AP, Pool)

“The theory is he knew the jig was up so he went home, blew the head off his son and butchered his wife. There is not one shred of evidence there was any problem between any of them,” defense attorney Dick Harpootlian said.

State agents and prosecutors took 13 months to seek murder indictments against Murdaugh. The defense motion was the first indication authorities might have one of the two guns used. No evidence has made public about a possible confession or an eyewitness account.

In the blood spatter evidence, Murdaugh’s lawyers said emails turned over to them by prosecutors showed an expert, who analyzed the shirt Murdaugh was wearing when he said he found the bodies, initially determined there were no blood spatter stains, only spots that could have happened when Murdaugh checked to see if his son and wife were still alive.

The expert changed his mind several weeks later after state agents flew to his home in Oklahoma, according to the emails cited by Murdaugh’s lawyers. Testing on the shirt used chemicals that made it impossible for any defense expert to do their own testing or even check the original results, the defense said.

Murdaugh’s trial is expected to last up to three weeks, with prosecutors and defense attorneys providing a list of 255 potential witnesses to the judge. 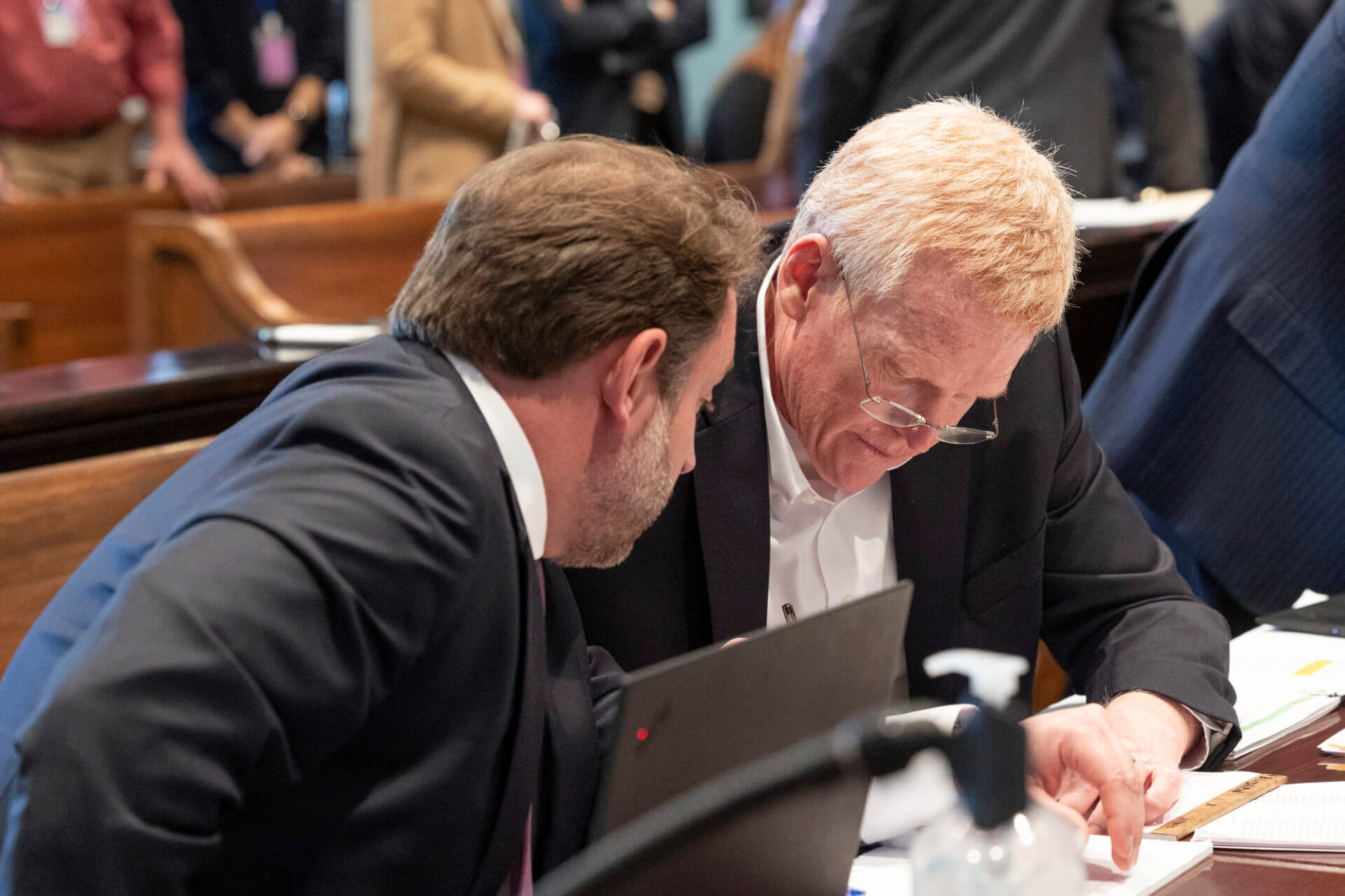