BOSTON (AP) — Prosecutors dropped a case Wednesday accusing Kevin Spacey of groping a young man at a resort island bar in 2016 after the accuser refused to testify about a missing cellphone the defense says contains information supporting the actor’s claims of innocence.

Spacey was charged with indecent assault and battery last year in the only criminal case that has been brought against the actor since his career collapsed amid a slew of sexual misconduct allegations. The two-time Oscar winner was among the earliest and biggest names to be ensnared in the #MeToo movement against sexual assault and harassment that swept across the entertainment and other industries. 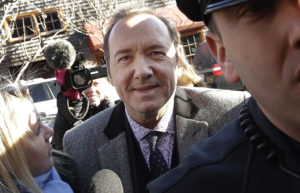 FILE – In this Jan. 7, 2019 file photo, actor Kevin Spacey arrives at district court in Nantucket, Mass. On Wednesday, July 17, prosecutors dropped the sexual assault case against Oscar-winning actor, who had been accused of groping 18-year-old man in 2016 in the crowded bar at the Club Car in Nantucket. (AP Photo/Steven Senne, File)

Spacey denies groping the man, whose mother first went public with the allegations in 2017.

A phone message seeking comment was left with Spacey’s lawyer.

The actor’s accuser was ordered to take the stand earlier this month after he said he lost the cellphone he used the night of the alleged groping. The defense said it needed the phone to recover deleted text messages it says would help Spacey’s case.

The man denied deleting messages or manipulating screenshots of conversations he provided to investigators. But when he was pressed by the defense about whether he knew that altering evidence is a crime, he invoked his Fifth Amendment right against self-incrimination , and the judge said his testimony would be stricken from the record.

The judge then questioned how prosecutors would be able to bring Spacey to trial if the accuser continued to refuse to testify, and prosecutors told the judge they needed time to decide how to proceed.

On Wednesday, Cape and Island District Attorney Michael O’Keefe said in court documents that they were dropping the charge “due to an unavailability of the complaining witness.”

Prosecutors said in an emailed statement that they met with the man and his lawyer Sunday and told him that if he wouldn’t testify in further proceedings, they couldn’t move forward with the case. The man “elected not to waive his right under the Fifth Amendment,” prosecutors said.

Prosecutors said they could further pursue the case and grant the accuser immunity but then they would need more than his uncorroborated testimony.

Furthermore, “a grant of immunity compromises the witness to a degree which, in a case where the credibility of the witness is paramount, makes the further prosecution untenable,” they said.

Mitchell Garabedian, a lawyer for the accuser, said in email that the man and his family “have shown an enormous amount of courage under difficult circumstances.” Garabedian said he had no further comment.

The hearing at which the accuser testified came days after the man abruptly dropped a lawsuit he had just recently filed against the actor that sought damages for “severe and permanent mental distress and emotional injuries.” The suit was dismissed “with prejudice,” meaning it cannot be refiled.

The man did not receive a settlement to drop the civil case, his mother said. His lawyer said he dropped it because he was emotionally overwhelmed and wanted only “one roller coaster ride at a time” and so chose to focus on the criminal case.

The man’s mother, former Boston TV anchor Heather Unruh, alleged in 2017 that Spacey got her son drunk and sexually assaulted him at the Club Car, a bar on Nantucket where the teen worked as a busboy.

The man told police he went over to talk to Spacey after his shift because he wanted to get a picture with the former “House of Cards” star. He said Spacey bought him several drinks and tried to persuade him to come home with him before unzipping the man’s pants and groping him for about three minutes.

Unruh’s son told police he tried to move Spacey’s hands, but the groping continued, and he didn’t know what to do because he didn’t want to get in trouble for drinking because he was underage. The man said he fled when Spacey went to the bathroom.

Shortly after Spacey was charged, he posted a video on YouTube in the voice of his “House of Cards” character who was killed off after the sexual misconduct allegations emerged, saying “I’m certainly not going to pay the price for the thing I didn’t do.”

Spacey has faced several other accusations.

His first accuser, actor Anthony Rapp, said Spacey climbed on top of him on a bed when Rapp was 14 and Spacey 26. Spacey said he did not remember such an encounter but apologized if the allegations were true.

The Associated Press does not typically name people who say they are the victims of sexual assault unless they identify themselves publicly. Rapp has; Unruh’s son has not.