DENVER (AP) — The reduction of a 110-year prison sentence to 10 years by Colorado’s governor for a trucker convicted of killing four people in a fiery interstate crash is hurting prosecutors’ efforts to negotiate sentences in other cases, according to two district attorneys.

The Dec. 30 commutation by Democratic Gov. Jared Polis for the trucker was “unprecedented, premature and unwarranted” because Rogel Aguilera-Mederos’ case was still active, with a judge scheduled to review a prosecutor’s request to reduce the sentence, said Boulder County District Attorney Michael Dougherty and Mesa County District Attorney Dan Rubinstein. 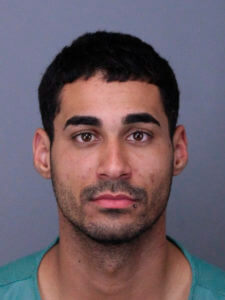 FILE – This 2019 photo provided by the Lakewood Police Department shows Rogel Aguilera-Mederos. Aguilera-Mederos, who was convicted in October 2021 of causing a fiery pileup that killed four people and injured six others on Interstate 70 west of Denver in April 2019, was sentenced Monday, Dec. 13 to 110 years in prison. Gov. Jared Polis’ reduction of the 110-year prison sentence to 10 years for convicted Aguilera-Mederos of killing four people in a fiery interstate crash is harming prosecutors’ efforts to negotiate sentences in other cases, a bipartisan pair of district attorneys say. (Lakewood Police Department via AP, File)

Dougherty is a Democrat and Rubinstein is a Republican and both told Polis in a Jan. 20 letter that his decision “is having a substantial ripple effect” on other cases, The Denver Post reported on Wednesday. The Post obtained the letter through an open records request.

“Sentences should be influenced by the facts and circumstances, not by petitions, online surveys or tweets,” they said, referring to a national campaign to lower Aguilera-Mederos’ sentence prior to Polis’ decision.

Dougherty and Rubinstein said that the decision affected prosecutors’ efforts to reach an eight-year sentence in a recent Boulder County sexual assault case, saying the defendant’s attorney objected that eight years was excessive in light of Aguilera-Mederos’ 10-year term.

Dougherty told The Post that he and Rubinstein met with Polis after they sent the letter and that the prosecutors “are optimistic that our concerns were understood and that what happened in that case was an exception.”

Polis spokesman Conor Cahill said the governor reduced the trucker’s sentence because “there was clearly an urgency to remedy this sentence and restore confidence in the uniformity and fairness of our criminal justice system.” 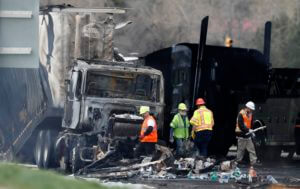 FILE – Workers clear debris from the eastbound lanes of Interstate 70 on April 26, 2019, in Lakewood, Colo., following a deadly pileup involving a semi-truck hauling lumber. Gov. Jared Polis’ reduction of a 110-year prison sentence to 10 years for the trucker convicted of killing four people in a fiery interstate crash is harming prosecutors’ efforts to negotiate sentences in other cases, a bipartisan pair of district attorneys say. (AP Photo/David Zalubowski, File)

Polis’ move came days after a judge scheduled a January hearing to reconsider the sentence at the request of the local district attorney, Alexis King, who had planned to ask that it be reduced to 20 to 30 years.

About 5 million people signed an online petition seeking clemency for Aguilera-Mederos, who was convicted of vehicular homicide and other charges in the explosive 2019 pileup.

Aguilera-Mederos testified that he was hauling lumber when the brakes on his semitrailer failed as he was descending a steep grade of Interstate 70 in the Rocky Mountain foothills.

His truck plowed into vehicles that had slowed because of another wreck, setting off a chain-reaction crash and a fireball that consumed vehicles and melted parts of the highway.

Judge Bruce Jones imposed the 110-year sentence on Dec. 13 after finding it was the mandatory minimum term set forth under state law, noting it would not have been his choice.