SANTA FE, N.M. (AP) — A sheriff’s department submitted on Thursday its investigative findings to prosecutors in the death of a cinematographer shot and killed by Alec Baldwin on a film set in New Mexico in October 2021.

Santa Fe Sheriff’s Office spokesman Juan Ríos said that two binders of information were turned over to the Santa Fe-based district attorney’s office, without setting forth any recommendations about possible criminal charges. 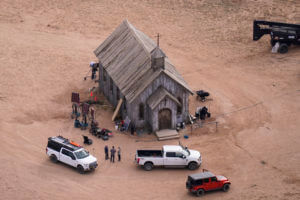 FILE – This aerial photo shows part of the Bonanza Creek Ranch film set in Santa Fe, N.M., on Saturday, Oct. 23, 2021, where cinematographer Halyna Hutchins died from a gun fired by actor Alec Baldwin. The family of a cinematographer shot and killed by Alec Baldwin on the set of the film “Rust” has agreed to settle a lawsuit against Baldwin and the movie’s producers, and production will resume on the project. (AP Photo/Jae C. Hong, File)

He said the case file outlines all the evidence collected, including investigative interviews and forensic analysis of physical evidence by the FBI. District Attorney Mary Carmack-Altwies said through a spokeswoman that investigators and prosecutors will now begin a thorough review to make a timely decision about whether to bring charges, without mention of specific deadlines.

Cinematographer Halyna Hutchins died shortly after being wounded by a gunshot during setup for a scene in the western movie “Rust” at a filmset ranch on the outskirts of Santa Fe on Oct. 21, 2021. Baldwin was pointing a pistol at Hutchins when the gun went off went off, killing her and wounding the director, Joel Souza.

Santa Fe County Sheriff Adan Mendoza has described “a degree of neglect” on the film set for “Rust” but is leaving decisions about potential criminal charges to prosecutors.

The family of Hutchins — widower Matthew Hutchins and 9-year-old son Andros — recently settled a lawsuit against producers of “Rust” under an agreement that aims to restart filming with Matthew’s involvement as executive producer. 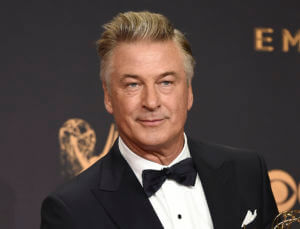 FILE – Alec Baldwin poses in the press room with the award for outstanding supporting actor in a comedy series for “Saturday Night Live” at the 69th Primetime Emmy Awards in Los Angeles on Sept. 17, 2017. The family of a cinematographer shot and killed by Alec Baldwin on the set of the film “Rust” has agreed to settle a lawsuit against Baldwin and the movie’s producers, and production will resume on the project. (Photo by Jordan Strauss/Invision/AP, File)

Baldwin has said the gun went off accidentally and that he did not pull the trigger. But a recent FBI forensic report found the weapon could not not have fired unless the trigger was pulled.

New Mexico’s Office of the Medical Investigator determined the shooting was an accident following the completion of an autopsy and a review of law enforcement reports.

Rust Movie Productions continues to challenge the basis of a $137,000 fine against the company by New Mexico occupational safety regulators who say production managers on the set failed to follow standard industry protocols for firearms safety. The state Occupational Health and Safety Review Commission has scheduled an eight-day hearing on the disputed sanctions in April 2023.

In April, New Mexico’s Occupational Health and Safety Bureau imposed the maximum fine against Rust Movie Productions and distributed a scathing narrative of safety failures, including testimony that production managers took limited or no action to address two misfires of blank ammunition on set prior to the fatal shooting.

Rust Movie Productions told safety regulators that misfires prior to the fatal shooting of Hutchins did not violate safety protocols and that “appropriate corrective actions were taken,” including briefings of cast and crew.

Other legal troubles persist in relation to the film and the deadly shooting.