LOS ANGELES (SCRIPPS) — The family of a Robinhood user who died by suicide last year plans to file a wrongful death lawsuit against the stock-trading app, alleging the company exploited his inexperience, pushed him to make risky deals and failed to provide support when it appeared he had taken on copious amounts of debt.

The family of Alex Kearns filed the lawsuit on Monday, according to The Verge and the Wall Street Journal. 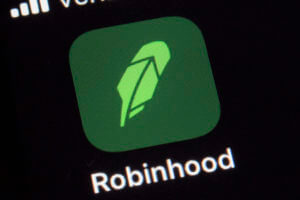 FILE – This Dec. 17, 2020, file photo shows the logo for the Robinhood app on a smartphone in New York. In a complaint filed Monday, Feb. 8, 2021, the family of a novice stock trader who killed himself after mistakenly believing he lost more than $700,000 are suing Robinhood Financial, claiming the popular stock trading platform’s business practices “directly” led to their son’s death. (AP Photo/Patrick Sison, File)

Kearns, a 20-year-old college student, died by suicide on June 12. He had recently begun investing with Robinhood, a tech company that allows small-time traders to invest fee-free in fractional shares of blue-chip stocks.

But according to CNN, shortly before Kearns’ death, he began using Robinhood to trade options instruments — complex financial procedures typically only carried out by experienced investors.

“I don’t understand how they allowed that to happen in the first place,” Dan Kearns told CBS News.

Family members have told CNN that at the time of Kearns’ death, his Robinhood account showed a negative balance of $730,000.

According to CBS News, the wrongful death lawsuit filed by Kearns’ family alleges that Kearns emailed Robinhood customer support three times on the night of his death. Kearns only received an automated reply.

Kearns died on June 12 when he was hit by a train in his hometown in Plainfield, Illinois, Patch News reports.

According to CBS News, the lawsuit alleges that it wasn’t until the next day that Robinhood sent a personalized response. Kearns’ father says it “haunts him to this day” to think that his son’s death could have been avoided had Robinhood responded to his emails more promptly.

It turns out that Kearns may not have even owed any money at all. According to CNN, it was common at the time for Robinhood to initially show massive losses on some option trades for a short time until the second half of a transaction was completed.

In the weeks after Kearns’ death, Robinhood pledged to make changes to the app to “better explain” the mechanics of how options trades work. But some financial regulators say those changes aren’t enough.

In December, Massachusetts filed a complaint against Robinhood, making the claim that the company aggressively seeks out “inexperienced’ customers and pushes them to make “repetitive and continuous” trades through “gamification.” For example, virtual confetti rains down in the app when a user completes a trade, and customers who used the app daily are given priority positions on waitlists.

Robinhood disputes the allegations made in the Massachusetts complaint.

“We disagree with the allegations in the complaint by the Massachusetts Securities Division and intend to defend the company vigorously,” the company said in a statement to CBS News.

Robinhood faced criticism from customers earlier this month when social media users banded together on the app to drive up GameStop stock’s price to beat a short attempt leveraged by several hedge funds.

The price of GameStop soared from about $17 a share to nearly $350 a share in a matter of weeks. But when the stock price reached its peak, Robinhood restricted trading on GameStop and similar stocks.

Robinhood CEO Vladimir Tenev has said that the restrictions were made pre-emptively out of fear that continued high-velocity trading on GameStop could lead to Robinhood exceeding SEC net capital requirements. However, the move has led to distrust among its most loyal customers, threats of Congressional investigations and several class-action lawsuits.