MADISON, Wis. (AP) — A judge was expected Tuesday to consider remaining motions in the case of an Illinois man accused of shooting three people during a protest against police brutality in Wisconsin last year, setting the final ground rules before a trial begins next month.

Kyle Rittenhouse of Antioch, Illinois, shot and killed Joseph Rosenbaum and Anthony Huber and wounded Gaige Grosskreutz during the protest in Kenosha.

Rittenhouse, who was 17 at the time, maintains he acted in self-defense but he faces multiple charges, including homicide. His trial is set to begin Nov. 1. 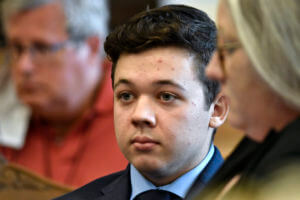 FILE – In this Friday, Sept. 17, 2021, file photo, Kyle Rittenhouse appears in court for a motion hearing in Kenosha, Wis. Rittenhouse, accused of shooting three people during a protest against police brutality in Wisconsin in 2020, is due back in court for what could be the final hearing before his trial begins in November. (Sean Krajacic/The Kenosha News via AP, File)

Kenosha County Circuit Court Judge Bruce Schroeder was expected to consider several outstanding motions Tuesday. Rittenhouse’s attorneys want the judge to dismiss a charge that he possessed his AR-style semiautomatic rifle illegally because he was a minor, and to allow testimony from an expert on police use-of-force decisions.

Prosecutors, meanwhile, were looking for permission to introduce a video showing Rittenhouse saying he’d like to shoot some men he thought were shoplifting from a pharmacy 15 days before the protest. Schroeder said last month he was leaning toward excluding it.

The judge also could rule on whether to allow both sides to send questionnaires to potential jurors. Such questionnaires can help attorneys screen for bias during jury selection.

Kenosha was in the throes of several nights of chaotic protests in August 2020 after a white police officer shot Jacob Blake, who is Black, during a domestic disturbance, leaving Blake paralyzed from the waist down. Rittenhouse, now 18, traveled to Kenosha in response to social media posts asking for help defending city businesses.

Many conservatives flocked to support Rittenhouse, calling him a patriot for seeking to stop violent protests, making him a symbol for gun rights and raising $2 million for his bail. Others, including some liberals and activists, portrayed him as a domestic terrorist and said he made a volatile situation worse by bringing a rifle to the streets of Kenosha.