FORT LAUDERDALE, Fla. (AP) — The preliminary stage of jury selection in the trial of the Florida school massacre suspect on charges that he attacked a jail guard concluded Wednesday, but not before attorneys clashed over whether Nikolas Cruz should be allowed to draw using colored pencils to avoid getting upset.

Prosecutor Maria Schneider accused Cruz’s attorneys of giving him the colored pencils to make the suspected killer of 17 at Marjory Stoneman Douglas High School in Parkland in February 2018 appear sympathetic before the prospective jurors.

Cruz’s attorneys gave him the pencils after the 23-year-old became visibly upset when a woman in Wednesday’s first group of 32 prospects began crying after seeing him — the third time that happened over two days of preliminary screening.

“They are doing (that) so the jury perceives that he is a child, that his mentality is somehow challenged,” Schneider told Circuit Judge Elizabeth Scherer.

Cruz’s lead attorney on the brawl case, Gabe Ermine, told Scherer that was not their intention — they only wanted to soothe his emotions. Throughout Tuesday’s groups, Cruz had been alert, took notes and conversed with his attorneys — a sharp contrast from Wednesday when he mostly stared glumly downward

“I am trying to keep him calm,” Ermine said. “We are not doing this for any nefarious reasons.” He said Cruz had not actually done any drawing.

Scherer ruled Cruz cannot be given colored pencils after her courtroom’s lead security deputy said for safety reasons he is only allowed the pen his guards issued him. When Wednesday’s second group of prospects was brought in, Cruz appeared to silently sob behind his pandemic mask before taking a deep breath and somewhat composing himself.

More than 100 prospective jurors over two days said they could fairly try Cruz on charges that he attacked Sgt. Raymond Beltran in November 2018, nine months after the Stoneman Douglas massacre. The shooting trial has not yet been scheduled because of the pandemic and arguments over evidence and testimony, but is expected to begin within the next few months. 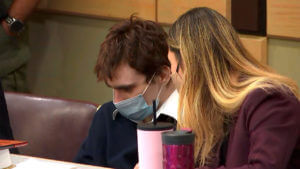 This image from video shows Parkland shooting suspect Nikolas Cruz as he sits in court on Oct. 6, 2021. Jury selection began today in Cruz’s jail brawl trial, in which he’s accused of attacking a guard nine months after his arrest. (Court TV)

Scherer said that was a sufficient pool to pick six jurors and some alternates when selection is finalized Oct. 18. Testimony will begin Oct. 19 and is only expected to last a day or two.

The prospects were not told before they entered the courtroom what case they were being considered for, but Cruz is infamous throughout Broward County and many appeared to recognize him before he was introduced, not just the women who cried.

Scherer asked each group of prospects if they could put aside their knowledge and feelings about Cruz and evaluate the battery case on its own merits. About half of the approximately 288 who came through the courtroom during the two days said they could not. They were dismissed along with the three crying prospects and those who said they had work or personal issues that limited their availability.

Beltran and Cruz fought on Nov. 13, 2018, with a soundless security camera recording the brawl. Beltran was overseeing Cruz during his recreation period when they suddenly began to argue. Cruz flipped both middle fingers at Beltran and then charged him, starting a minute-long fight that ended after Beltran staggered him with a blow to the head.

Beltran told investigators that Cruz attacked him after he asked him to stop dragging his feet and damaging his sandals. Cruz’s attorneys are expected to argue that Beltran had a history of mistreating Cruz and verbally instigated the fight.

Cruz faces a possible 15-year sentence if convicted of attempted criminal battery on a law enforcement officer and three lesser charges. Cruz will get either death or life in prison without parole if he is later found guilty of first-degree murder, but this trial still has relevance. If Cruz is convicted of attacking Beltran, prosecutors can argue that is an aggravating factor when they seek his execution during the penalty phase of his murder trial, if convicted.