ST. PETERSBURG, Fla. (WFTS) — A brother and sister in St. Petersburg, Florida are accused of purposely crashing into a motorcyclist on Saturday in an incident of road rage, police said on Tuesday. 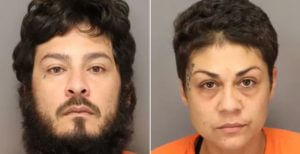 St. Pete PD said Narciso Rosario, 32, and his sister Solimar Rosario, 31, are both charged with attempted murder in the second degree.

Police said Narciso was driving a white Lincoln Mercury sedan while Solimar hung out of the window, “taunting” the victim. Narciso then purposely drove into the victim, which caused his motorcycle to go into oncoming westbound traffic and collide head-on with a truck, police said.

The pair then left the scene. Police did not provide information on what led up to the crash.

Police initially thought the crash was a hit-and-run.

This story was originally published Sept. 20, 2022 by WFTS in Tampa, an E.W. Scripps Company.