LOS ANGELES (Court TV) — Hip-hop superstar Snoop Dogg, scheduled to perform at Sunday’s Super Bowl LVI halftime show, is being sued for the alleged sexual assault of a woman in California in 2013.

The woman, described as a professional dancer, model, actress and host and identified as Jane Doe, says she attended a nightclub concert by the rapper on May 29, 2013, and was later forced to perform oral sex on him and his spiritual adviser. 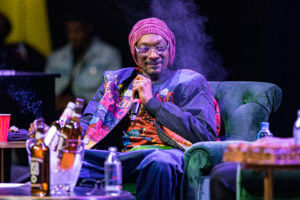 EL CAJON, CALIFORNIA – OCTOBER 22: Snoop Dogg speaks on stage on the final night of Jamie Foxx: Act Like You Got Some Sense Book Tour at The Magnolia on October 22, 2021 in El Cajon, California. (Photo by Daniel Knighton/Getty Images)

The lawsuit alleges that Snoop Dogg’s associate Bishop Don “Magic” Juan, 71, took her to his home against her will and forced himself on her at 4 a.m. that morning.

The next day, according to the lawsuit, Juan took the woman to a taping at Snoop Dogg’s studio, claiming it would be a “career move.”

The rapper, who was shooting the television series “Snoop Dogg’s Double G News Network,” sexually assaulted the woman while she was in a bathroom stall, according to the lawsuit.

Jane Doe was left there “humiliated, terrified and panicked,” the documents state.

The woman claims to have felt pressure from the rap superstar “due to his dominance, and his position of power over her, including his ability to hire and fire her and ensure that she would never be hired in his industry again,” the filing said.

The lawsuit was filed in the U.S. District Court for the Central District of California on Feb. 9.

According to the filing, the woman attempted to resolve the issue in private mediation on Tuesday, but discussions were “unsuccessful.”

Snoop Dogg’s representatives did not reply to a request for comment.

EL CAJON, CALIFORNIA – OCTOBER 22: Snoop Dogg speaks on stage on the final night of Jamie Foxx: Act Like You Got Some Sense Book Tour at The Magnolia on October 22, 2021 in El Cajon, California. (Photo by Daniel Knighton/Getty Images)

News of the lawsuit came on the heels of the news that Snoop Dogg had acquired iconic hip-hop label Death Row Records. Snoop Dogg is also scheduled to release a new album called “B.O.D.R. (Bacc on Death Row)” on Friday.

Snoop Dogg appeared at a Super Bowl press conference Thursday, but did not address the lawsuit. Contrary to previous years, no questions were taken.

The rapper posted a cryptic “gold digger season” note to his Instagram account Wednesday, which was still online as of Thursday morning.

The woman, who also named Juan in the suit, is demanding a jury trial and seeking monetary punitive damages and costs of her lawsuit.