SHELBYVILLE, Tenn. (WTVF) — Samuel Rich was arrested and charged with the attempted murder of Hannah Grace Perryman, but now, the case is raising questions about his criminal past. Records show he has actually gone before his own father in court and had previous cases dismissed.

Rich was added to the Tennessee Bureau of Investigation’s Most Wanted list on Aug. 13. He was wanted out of Bedford County on attempted murder and theft of property in connection to a shooting in Shelbyville.

He was arrested two days later when he surrendered to authorities in Bedford County. 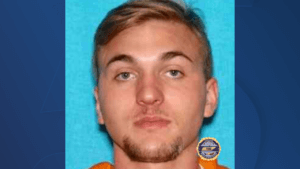 The case is multi-faceted. Rich is accused of shooting Perryman in the head and stealing a jeep belonging to her boyfriend Will Warner. Warner was later found dead in Nashville bay Metro water crews, but Rich is not, at this time, charged with his murder.

Rich also has a past of lesser offenses. In some cases, a special judge was assigned because his father Charles Rich is a general sessions judge in Bedford County.

But court records show Rich went before his father on this traffic violation and the case was dismissed.

“There is a code of judiciary that says you cannot preside over immediate relatives where you have a direct personal interest,” said attorney David Raybin.

He does not know the specifics of this father and son case. But he says, in general, if it happened, that’s a huge conflict of interest.

“You cannot have a judge adjudicating his or her own child’s case whether a $10 fine or murder,” Rabin said.

Judge Rich did not return our call for comment. His son remains locked up, and though it initially appeared as though he might go before his father after his most recent arrest, that is not going to happen.

The TBI continues to look into the murder of Will Warner. But so far, no charges have been filed in that case.

This story was originally published August 19, 2021, by WTVF in Nashville, an E.W. Scripps Company.