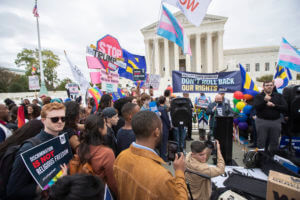 LGBT supporters gather in front of the U.S. Supreme Court, Tuesday, Oct. 8, 2019, in Washington. The Supreme Court is set to hear arguments in its first cases on LGBT rights since the retirement of Justice Anthony Kennedy. Kennedy was a voice for gay rights while his successor, Brett Kavanaugh, is regarded as more conservative. (AP Photo/Manuel Balce Ceneta)

With the court’s four liberal justices likely to side with workers who were fired because of their sexual orientation or transgender status, the question in two highly anticipated cases that filled the courtroom was whether one of the court’s conservatives might join them.

Justice Neil Gorsuch, President Donald Trump’s first Supreme Court appointee, said there are strong arguments favoring the LGBT workers. But he wondered whether the justices should take into account “the massive social upheaval” that might follow a ruling in their favor.

Two other conservatives, Chief Justice John Roberts and Justice Brett Kavanaugh did not squarely indicate their views, although Roberts also questioned how employers with religious objections to hiring LGBT people might be affected by the outcome.

The first of two cases involved a skydiving instructor and a county government worker in Georgia who were fired for being gay. The second case dealt with fired transgender funeral home director Aimee Stephens, who was in the courtroom for Tuesday’s arguments.

The Trump administration and lawyers for the employers hit hard on the changes that might be required in bathrooms, locker rooms, women’s shelters and school sports teams if the court were to rule that the Civil Rights Act of 1964 covers LGBT people. Lawmakers, not unelected judges, should change the law, they argued.

Justice Samuel Alito, a conservative, seemed to agree with that argument, saying Congress in 1964 did not envision covering sexual orientation or gender identity.

“You’re trying to change the meaning of ‘sex,'” Alito said. Justice Clarence Thomas, who returned to the bench Tuesday after staying home sick the day before, said nothing, as is his custom.

Justice Ruth Bader Ginsburg countered that Congress also could not have foreseen sexual harassment as a kind of sex discrimination in 1964, either.

Justice Elena Kagan suggested sexual orientation is a clear subset of sex discrimination, saying that a man who loves other men cannot be treated differently by an employer than a woman who loves men.

The cases are the court’s first on LGBT rights since Justice Anthony Kennedy’s retirement and replacement by Kavanaugh. Kennedy was a voice for gay rights and the author of the landmark ruling in 2015 that made same-sex marriage legal throughout the United States. Kavanaugh generally is regarded as more conservative.

A decision is expected by early summer 2020, amid the presidential election campaign. 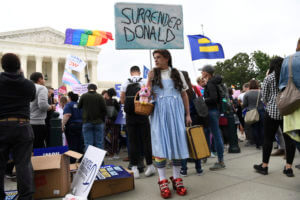 A ruling for employees who were fired because of their sexual orientation or gender identity would have a big impact for the estimated 8.1 million LGBT workers across the country because most states don’t protect them from workplace discrimination. An estimated 11.3 million LGBT people live in the U.S., according to the Williams Institute at the UCLA law school.

The Trump administration has changed course from the Obama administration and now supports the employers in arguing that the civil rights law’s Title 7 does not prohibit discrimination because of sexual orientation or transgender status.

People waited in line outside the court since the weekend to try to snag the few seats the court makes available to the public for arguments.

The appeals under consideration involve Gerald Lynn Bostock, who claims he lost his job working for Clayton County, Georgia, after he began playing in a gay recreational softball league. He lost his case in federal district court and at the 11th U.S. Circuit Court of Appeals in Atlanta.

Skydiving instructor Donald Zarda was fired shortly after telling a woman he was preparing to take on a dive that he was gay. Zarda, who worked for Altitude Express on New York’s Long Island, said he would sometimes reveal his sexual orientation to allay concerns women might have about being strapped together during a dive.

Zarda initially lost his lawsuit, but the 2nd U.S. Circuit Court of Appeals ruled for him. Zarda has since died. 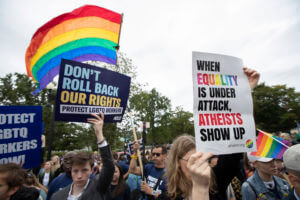 Supporters of the LGBT gather in front of the U.S. Supreme Court, Tuesday, Oct. 8, 2019, in Washington. The Supreme Court is set to hear arguments in its first cases on LGBT rights since the retirement of Justice Anthony Kennedy. Kennedy was a voice for gay rights while his successor, Brett Kavanaugh, is regarded as more conservative. (AP Photo/Manuel Balce Ceneta)

Stephens lost her job when she told Thomas Rost, owner of the Detroit-area R.G. and G.R. Harris Funeral Homes, that she had struggled with gender identity issues almost her whole life. She was planning to exchange the dark suit and tie she had worn to work for nearly six years as an embalmer and funeral director for a conservative dress or skirt that was required for women who worked for Rost.

Rost told Stephens her plan wouldn’t work and let her go. The federal Equal Employment Opportunity Commission sued on her behalf and, after losing in a district court, won a ruling in the 6th U.S. Circuit Court of Appeals in Cincinnati.

During the Obama years, the EEOC had changed its longstanding interpretation of civil rights law to include discrimination against LGBT people. The law prohibits discrimination because of sex but has no specific protection for sexual orientation or gender identity.

The Trump administration and the employers say Congress could easily settle the matter by amending Title 7 to include LGBT people. Legislation to that effect is pending in Congress but is not likely to pass the Republican-controlled Senate.

But the workers contend, and the lower courts that have ruled for them have reasoned, that the law as it stands plainly covers sexual orientation and gender identity because discrimination against them is based on generalizations about sex that have nothing to do with their ability to do their jobs.

They also argue that they were fired for not conforming to sex stereotypes, a form of sex discrimination that the Supreme Court recognized 30 years ago. 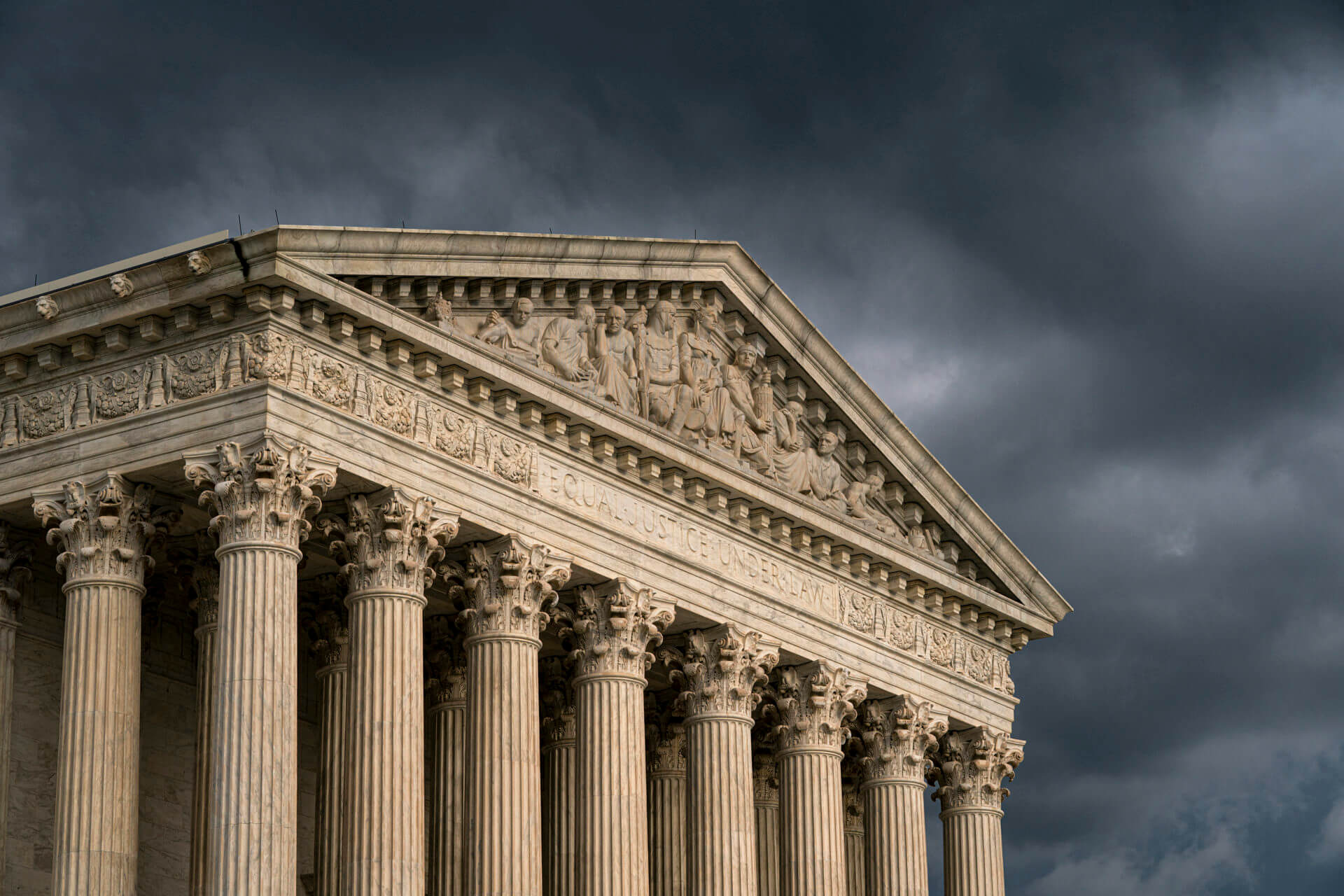 FILE - In this June 20, 2019, file photo, the Supreme Court in Washington. The Supreme Court is set to hear arguments in two of the term’s most closely watched cases over whether federal civil rights law protects LGBT people from job discrimination. The cases Tuesday, Oct. 8, are the court’s first on LGBT rights since Justice Anthony Kennedy’s retirement and replacement by Justice Brett Kavanaugh.(AP Photo/J. Scott Applewhite, File)
MORE NEWS