The order on Thursday means Adree Edmo can continue getting pre-surgical treatments and potentially even gender confirmation surgery this year while Idaho officials wait to hear if the high court will consider their appeal. 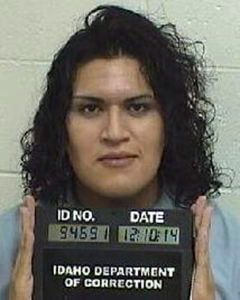 This Dec. 10, 2014, file photo provided by the Idaho Department of Correction shows Adree Edmo. The U.S. Supreme Court won’t put the gender confirmation surgery on hold for Edmo, an Idaho transgender inmate, while a lawsuit over the procedure moves forward. The order on Thursday, May 21, 2020, means Edmo can continue getting pre-surgical treatments and potentially even gender confirmation surgery this year while Idaho officials wait to hear if the high court will consider their appeal. (Idaho Department of Correction via AP, File)

Edmo has been housed in a men’s prison facility since she first began serving time on a charge of sexually abusing a child younger than 16 in 2012. She’s scheduled for release in July of 2021.

She sued the state three years ago, contending that prison officials’ refusal to provide her with gender confirmation surgery causes her severe distress because she has gender dysphoria. One of her attorneys, Lori Rifkin, has said Edmo experienced such suffering from the lack of treatment that she twice tried to cut off her testicles in her prison cell.

Attorneys for the Idaho Department of Correction and private prison healthcare company Corizon have agreed that Edmo’s condition has caused her distress. But they contend her prison doctors have determined the surgery isn’t medically necessary and would do more harm than good because it could exacerbate her other mental health conditions.

Idaho Gov. Brad Little has also said Edmo shouldn’t have access to taxpayer-funded surgical procedures that other Idahoans can’t get covered through their own insurance.

But Edmo’s attorneys say prisons don’t get to pick and choose which people to treat, and they’re required to provide medically necessary care to incarcerated people. They have also contended that the harm done to Edmo by denying the surgery vastly outweighs any harm that providing it would pose to the state or Corizon.

Edmo has so far prevailed at both the federal district and appellate courts.

The state’s attorneys asked the Supreme Court to consider the case earlier this month, and the high court hasn’t yet decided if it will do so. The order denying the stay was given by Justice Elena Kagan without explanation, but it noted that Justices Clarence Thomas and Samuel Alito would have granted the state’s request.