PHOENIX (AP) — An Arizona teenager suspected of killing one person and injuring a dozen others during a 90-minute drive-by shooting spree in metropolitan Phoenix told police he believed people were after him because of his involvement in another shooting, according to court documents released Friday. 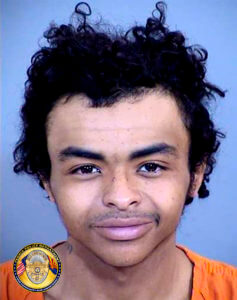 This undated photo provided by the Peoria Police Department, shows Ashin Tricarico, who is accused in a string of drive-by shootings in metropolitan Phoenix. Tricarico, 19, is accused of opening fire on vehicles and pedestrians from a white SUV in at least eight separate shootings in three cities that stoked fear throughout the region. Tricarico, who was arrested Thursday, June 17, 2021, appeared remotely for a court hearing Friday and was directed to contact a public defender. (Peoria Police Department via AP)

Ashin Tricarico, 19, is accused of opening fire on vehicles and pedestrians from a white SUV on Thursday in at least eight separate shootings in three cities that stoked fear throughout the region. Four people were shot, including a man whose pickup truck careened into a canal alongside a freeway.

A witness told police he saw the suspect drive up behind the truck and swerve into the lane beside it and then he heard a gunshot. Police later found the man’s body inside the truck with a gunshot wound to the neck and his head, face and body covered in blood, the court documents state.

Police said Tricarico admitted to some of the shootings and declined to talk about others but denied firing at a woman or killing the man, whom police haven’t identified. Tricarico told police he was involved in another shooting a month ago in Phoenix while he was a security guard and believed people have been following him because of it, according to the court documents.

“Ashin thinks every vehicle and person he drives past is pointing a gun at him,” police wrote.

Phoenix police did not immediately return a message from The Associated Press seeking confirmation of Tricarico’s account of an earlier shooting.

Tricarico, who was arrested Thursday, appeared remotely for a court hearing Friday and was directed to contact a public defender. The Maricopa County Office of the Public Defender did not have a specific attorney assigned to Tricarico, whose next court hearing is June 24. He faces charges of first-degree murder, shooting from a vehicle, aggravated assault and endangerment.

There was no immediate response to a message left at a number listed for a relative of Tricarico.

Documents police filed in Maricopa County Superior Court allege Tricarico fired at more than a dozen people, seemingly at random. In some cases, he pulled up beside vehicles and placed the barrel of an assault rifle through his window and fired multiple shots, police said.

A 3-year-old child was in one vehicle with her mother when the front windshield and driver’s side door were hit, but wasn’t harmed. The mother told police she heard three gunshots while driving and immediately felt pain in her arm, stomach and head. She was covered in blood and screaming “oh my god,” according to witness statements.

Others were injured as bullets hit or shattered glass. Authorities said the injured ranged in age from 19 to 56. 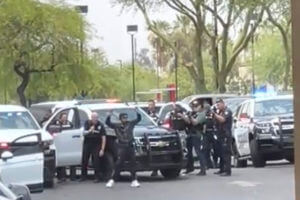 In this image from video provided by Neil Betrue, a suspect is surrounded by police before being taken into custody after multiple shootings in Surprise, Ariz., on Thursday, June 17, 2021. Investigators on Friday, June 18 were trying to determine why a gunman opened fire on vehicles and pedestrians for some 90 minutes across metropolitan Phoenix, leaving one person dead and a dozen others injured in the string of drive-by shootings. Authorities believe the man they arrested after the shootings on Thursday acted alone. His identity hasn’t been released.. (Neil Betrue via AP)

Police said Tricarico left his house in the city of Surprise with an AR-15 rifle and later bought four boxes of ammunition, filling two 30-round magazines. Matching shell casings were found at some of the shooting scenes, police said.

Richard Valencia, 34, said he spent Thursday afternoon in the hospital after being shot in the shoulder as he walked from a convenience store in Surprise. He told Phoenix news station KSAZ-TV that he fired back three times with his own weapon.

“I don’t even know the guy,” he said. “It was completely random.”

Victims and witnesses were able to give authorities a description of the suspect’s vehicle — a white Volkswagen SUV — and the license plate number. A local fire department spotted the vehicle and called police, who swarmed a shopping center that includes restaurants, a nail salon and a Walgreens.

Neil Betrue, a pastor in Surprise, was alone in his church’s office when he noticed a few police officers and heard a helicopter buzzing overhead. He peered out the door and saw even more officers surrounding the suspect’s car and started recording the commotion on his cell phone.

“I did not know at the time it was a shooting spree happening,” Betrue told The Associated Press on Friday. “I just thought maybe there must have been a car chase or something.”

As officers drew their weapons, the suspect, wearing a black jacket, black pants and white shoes, raised his hands in the air. He then was cuffed without incident, Betrue’s video shows.

“I’m just thankful that he didn’t try to put the officers or any of the business or anyone else in harm’s way here,” Betrue said.

Police don’t believe anyone else was involved in the attacks.

Tricarico also was accused of pointing an assault rifle at a man in the parking lot of a convenience store Wednesday evening as the two were sitting in their vehicles, according to the court documents. Tricarico later followed the man, who ducked when he heard a gunshot but wasn’t harmed, police said. Tricarico, however, claimed not to have left his house that day.

Police said they won’t release any further information until Monday, saying the investigation is complex.

The Phoenix metropolitan area has seen other deadly drive-by shootings.

In 2005 and 2006, the area was terrorized by a pair of serial shooters who drove around and shot at random targets, killing six people and wounding 19 others. After they were finally arrested, airport janitor Dale Hausner and his roommate Sam Dietman, a petty criminal, were given life sentences. Hausner killed himself in prison by overdosing in 2013.

A decade later, a similar string of drive-by shootings started. In 2015 and 2016, nine people were killed and two injured in what police called the “Serial Street Shootings.” Police in 2017 arrested Aaron Saucedo, then 23, alleging he randomly gunned down the people, often at night, while they were returning home from work or in their front yards. He has pleaded not guilty to numerous charges and is awaiting trial. Prosecutors are seeking the death penalty.