MINNEAPOLIS (AP) — A use-of-force and Taser expert testified Wednesday at Kim Potter’s manslaughter trial that police officers are allowed to use deadly force to stop fleeing suspects, as her attorneys argue that Potter was justified in shooting Black motorist Daunte Wright even if she didn’t intend to.

Potter, who resigned from the Brooklyn Center police force two days after she shot and killed Wright, has said she meant to pull her Taser instead of her gun after Wright tried to drive away as officers attempted to arrest him in the Minneapolis suburb on an outstanding weapons charge. 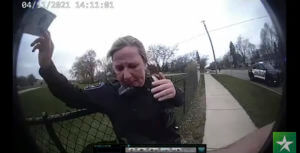 In this screen grab police body cam video is shown in court on Friday, Dec. 10, 2021 at Hennepin County Courthouse in Minneapolis, Minn., former Brooklyn Center police Officer Kim Potter reacts after a traffic stop in which Daunte Wright was shot on April 11, 2021. Potter is charged with first- and second-degree manslaughter in the April 11 shooting of Wright, a 20-year-old Black motorist, following a traffic stop in the Minneapolis suburb of Brooklyn Center. (Court TV)

Prosecutors nearing the end of their case have drawn on testimony from Potter’s former colleagues to portray an officer whose intended use of a Taser would have violated department policy despite her extensive training.

The defense has called the shooting a horrific mistake, but has also asserted that Potter would have been within her rights to use deadly force on Wright because he might have dragged another officer with his car.

Sgt. Mike Peterson, an instructor in use of force and Taser use at the Brooklyn Center Police Department, testified under cross-examination from one of Potter’s attorneys on Wednesday that officers are trained to provide a warning before they use their Tasers, such as saying “I’ll tase you.” He also agreed under questioning from the attorney that officers can use Tasers against suspects who are violent or physically resisting.

Peterson said the decision on whether to use a Taser or any other type of force “has to be made in a very short amount of time” and that there have been other instances around the country in which officers confused a gun for a Taser.

“Mistakes can happen when someone confuses a Taser with a gun?” Potter attorney Paul Engh asked Peterson.

Potter, 49, is charged with first- and second-degree manslaughter in Wright’s death on April 11 after he was pulled over for having expired license plate tags and an air freshener dangling from his rear-view mirror. Video captured the moments when Wright pulled away from officers who were trying to arrest him on an outstanding warrant, with Potter shouting “I’ll tase you!” and then shooting Wright with her handgun.

Potter is white and Wright was Black, and his death set off several nights of angry protests in Brooklyn Center. It happened while a white former officer, Derek Chauvin, was on trial in nearby Minneapolis for the killing of George Floyd. 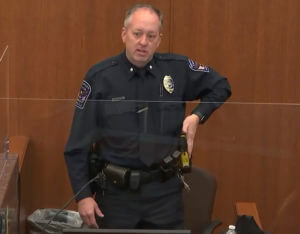 On Tuesday, Brooklyn Center Police Commander Garett Flesland testified that Potter was trained on policies as they evolved during her 26-year career and repeatedly signed documents acknowledging the policies. Prosecutors introduced several documents that Flesland testified showed Potter’s repeated certifications on Taser training, and her awareness of the warnings for their use — including a certification the month before Wright was shot.

Peterson on Tuesday also walked jurors through the Brooklyn Center department’s training procedures for using Tasers as prosecutor Matthew Frank showed them pages from the manufacturer’s and the department’s training materials that warn against the dangers of mixing up a Taser and a handgun. Frank also highlighted portions that say a Taser should not be used simply to stop fleeing suspects or on suspects who are operating vehicles.

Peterson also demonstrated how officers are supposed to run a “spark test” at the beginning of every shift to check whether their Tasers are working. He did so with his own device, which generated a loud buzz for five seconds as electricity arced across the electrodes.

Sam McGinnis, a senior special agent with the state’s Bureau of Criminal Apprehension, testified Monday that Potter failed to run the test on her Taser on the day she shot Wright.

Judge Regina Chu ruled Tuesday that if Potter is convicted of one or both of the manslaughter counts against her, she would preside over a separate trial to determine if there were aggravating factors that would allow Chu to give Potter a sentence above what the state’s guidelines suggest.

In order for Potter to be sentenced above what the guidelines suggest, prosecutors would have to prove there were aggravating factors; prosecutors allege that Potter’s conduct caused a danger to others and that she abused her position of authority.

Prosecutors presented evidence of these aggravating factors when they brought in testimony about injuries to Wright’s passenger and an occupant of the car that collided with Wright’s right after Potter shot him. Chu said that this testimony was not prejudicial and could remain part of this case because evidence about the crash also relates to whether Potter’s use of force was reasonable.