OXFORD TOWNSHIP, MI (WXYZ) — A third federal lawsuit has been filed against Oxford Community Schools and other defendants following the deadly shooting last year on Nov. 30.

Ethan Crumbley, 15, is accused of opening fire in Oxford High School that day. Four students Tate Myre, Hana St. Juliana, Madisyn Baldwin and Justin Shilling were killed and six other students and a teacher were injured. 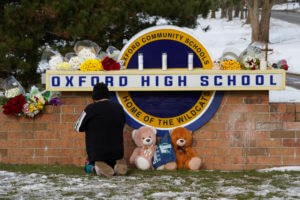 According to the lawsuit, the plaintiffs claim the defendants had knowledge that Crumbley was a threat to Oxford High School students and should have contacted authorities about his behavior prior to the shooting.

The lawsuit details how the alleged shooter aimed his gun at John and Marco, firing at them both. On Nov. 30, John was reportedly shot while Marco was able to escape as he saw several bullets strike the hallway wall. The lawsuit says John fell down the hallway and was able to make it out the first set of doors before notifying his brother Anthony, who was in art class, that he’d been shot.

The plaintiffs are seeking damages for items, including but not limited to, medical costs, emotional distress and the need for therapy and counseling.

This story was originally published Feb. 25, 2022, by WXYZ in Detroit, an E.W. Scripps Company.