GEORGETOWN, Ky. (WLEX) — The third trial for a Scott County man accused of killing his parents in 2007 started Tuesday morning.

James Anthony Gray’s first trial ended with a mistrial and his conviction in the second trial was overturned because of how police got his confession.

In opening statements Tuesday, prosecutors argued that Gray killed his parents out of hate and greed. 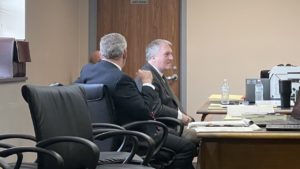 Shaw also listed several statements he argues Gray made to detectives and others, including “they had it coming” and “I didn’t want them to suffer.”

Gray’s defense said the murders were committed by another man, who they say bought stolen guns from Gray. They also said Gray has an alibi, and that cell phone data and witnesses will prove it.

“When those three shots rang out, Anthony was on a job site,” Gray’s attorney, Rodney Barnes, said.

One said the Grays’ assets total more than $600,000 and that their estate will not go to James if he is found responsible for their deaths.

Another said she heard James say something odd at the crime scene after his parents were found dead.

“I heard him say, I’ll never work a day in my life,” Theresa Colson, said. “I need to go to the store and get the paperwork of who owes dad money and start collecting.”

After the prosecution calls all witnesses, the defense will call theirs.

The trial is expected to last at least two weeks.

This story was originally published August 10, 2021, by WLEX in Lexington.