WEST PALM BEACH, Fla. (AP) — Golfer Tiger Woods’ girlfriend has been dropped from a wrongful death lawsuit filed by the parents of a drunken driver who died in a car crash. 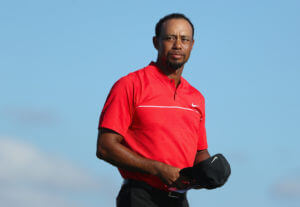 NASSAU, BAHAMAS – DECEMBER 04: Tiger Woods of the United States looks on as he walks off the 18th hole during the final round of the Hero World Challenge at Albany, The Bahamas on December 4, 2016 in Nassau, Bahamas. (Photo by Christian Petersen/Getty Images)

The lawsuit initially named Woods, his girlfriend Erica Herman and The Woods restaurant. His name was dropped from the litigation in June.

The Palm Beach Post reports attorney Spencer Kuvin said he’s no longer pursuing Herman in connection with the Dec. 10 crash that killed Nicholas Immesberger. He says the claims against the couple could be revived later.

The lawsuit says Immesberger was served excessive amounts of alcohol before the crash. It also claimed Herman recruited him as a bartender there despite knowing he was an alcoholic.

Attorney Barry Postman, who represents the couple and the restaurant, says Kuvin had no reason to sue them.