CHARLOTTE, Tenn. (Court TV) — Steven Wiggins has been sentenced to death for the murder of Dickson County Sgt. Daniel Baker. Jurors reached the verdict in Wiggins’ punishment phase after two hours of deliberations. The sentence was handed down six days after the jury first found him guilty of all charges.

Steven Wiggins is accused of killing Sgt. Daniel Baker during a traffic stop back in 2018. Wiggins is charged with premeditated first-degree murder after authorities say he shot Baker four times after the sergeant stopped the vehicle, which had been reported stolen. 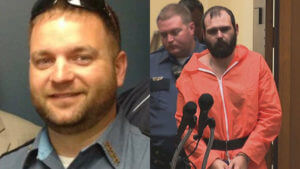 Wiggins then led law enforcement on a manhunt through the county before he was arrested about two miles from where Sgt. Baker was killed.

Erika Castro Miles, a woman who was with Wiggins, is also charged and will be tried later.

Wiggins’ trial is the latest high-profile murder case in the small town of Charlotte. Only a few months ago, Joseph Daniels’ murder trial was held in the same courthouse.

This story was originally published August 2, 2021, by WTVF in Nashville.