AUSTIN, Texas (AP) — New outrage ripped through Uvalde on Thursday over revelations that a school police officer hired after the Robb Elementary massacre was not only on campus during the May attack as a Texas state trooper but under investigation over her actions while a gunman killed 19 students and two teachers. 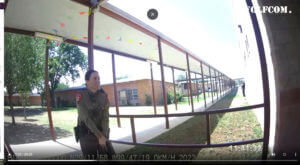 This image from video released by the City of Uvalde, Texas shows Texas Department of Public Safety trooper Crimson Elizondo responding to a shooting at Robb Elementary School, on May 24, 2022 in Uvalde, Texas. The former Texas state trooper under investigation for the law enforcement response to the deadly school shooting in Uvalde has been hired by the school district as a campus police officer. (City of Uvalde via AP)

The hiring of Officer Crimson Elizondo was first reported by CNN on Wednesday night. Less than 24 hours later, the Uvalde Consolidated Independent School District fired Elizondo on Thursday in the face of swift and mounting backlash from families of the fourth-grade victims and Texas lawmakers.

But the abrupt firing did little to diffuse anger in Uvalde. Families demanded answers over why the school district’s small police force in the first place hired one of the nearly 400 law enforcement officers who rushed to the scene of the May 24 attack but waited more than an hour to confront a gunman with a AR-15-style rifle.

Adding to some parents’ disbelief was the fact that Elizondo, according to records released by the Texas Department of Public Safety, is among at least seven troopers who were at the scene and put under internal investigation over their actions during one of the deadliest classroom shootings in U.S. history.

“They knowingly hired her,” tweeted Brett Cross, whose 10-year-old son Uziyah Garcia was killed in the attack.

The documents show that after the Uvalde school district contacted DPS in July while conducting a background screening of Elizondo, the agency sent back a letter noting that she was under internal investigation over allegations that her actions were “inconsistent with training and Department requirements.”

In a statement Thursday announcing the firing, Uvalde school officials did not address their decision to originally hire Elizondo.

“We sincerely apologize to the victim’s families and the greater Uvalde community for the pain that this revelation has caused,” the statement said.

Elizondo gave notice of her resignation as a Texas state trooper Aug. 17 and her last day with the department of public safety was Aug. 29, said Travis Considine, a DPS spokesperson.

In police body camera footage, CNN reported, Elizondo is heard telling other officers at the scene of Robb Elementary: “If my son had been in there, I would not have been outside. I promise you that.”

Elizondo’s profile was on the Uvalde school district’s website Thursday morning but had been removed by the afternoon.

Hours before the firing, families had gathered outside the school district’s administrative office to protest the hiring.

“We are disgusted and angry at Uvalde Consolidated Independent School District’s (UCISD) decision to hire Officer Crimson Elizondo. Her hiring puts into question the credibility and thoroughness of UCISD’s HR and vetting practices,” a statement from some of the victims’ families said. “And it confirms what we have been saying all along: UCISD has not and is not in the business of ensuring the safety of our children at school.”

In July, a damning report cited “egregiously poor decision making” by law enforcement officers who waited more than an hour before confronting the 18-year-old gunman. The campus police chief, Pete Arredondo, was fired in August.

“A DPS trooper was on scene within two minutes of the shooter and failed to follow training, protocol, and the duty they were sworn to,” he said. “People’s children died because DPS officials failed to do their job.”

A district spokesperson did not immediately return messages Thursday.