UVALDE, Texas (AP) — A new wave of anger swept through Uvalde on Tuesday over surveillance footage of police officers in body armor milling in the hallway of Robb Elementary School while a gunman carried out a massacre inside a fourth-grade classroom where 19 children and two teachers were killed.

The video published Tuesday by the Austin American-Statesman is a disturbing 80-minute recording of what has been known for weeks now about one of the deadliest school shootings in U.S. history: that heavily armed police officers, some armed with rifles and bulletproof shields, massed in the hallway and waited more than an hour before going inside and stopping the May 24 slayings. 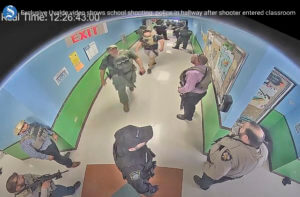 In this photo from surveillance video provided by the Uvalde Consolidated Independent School District via the Austin American-Statesman, authorities stage in a hallway as they respond to the shooting at Robb Elementary School in Uvalde, Texas, Tuesday, May 24, 2022. (Uvalde Consolidated Independent School District/Austin American-Statesman via AP)

But the footage, which until now had not surfaced publicly, anguished Uvalde residents anew and redoubled calls in the small South Texas city for accountability and explanations that have been incomplete — and sometimes inaccurate — in the seven weeks since the shooting. Hours after the video was published, some residents at a Uvalde City Council meeting said they had not been able to bring themselves to watch it.

Jesus Rizo said officers who are paid taxpayer dollars to protect people should not have “sat there” when children were in danger.

Others demanded consequences for police and more information in an investigation marked by confusing statements that have had to be retracted at times.

“Give these families some closure,” said Daniel Myers, a pastor in Uvalde and family friend to one of the victims.

An investigative committee led by Texas lawmakers had earlier announced plans to show the video to Uvalde residents for the first time Sunday, in addition to sharing their findings after weeks of closed-door testimony from more than 40 witnesses. 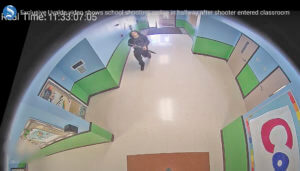 In this photo from surveillance video provided by the Uvalde Consolidated Independent School District via the Austin American-Statesman, a gunman carrying an AR-15 style rifle enters and walks down a hallway at Robb Elementary School in Uvalde, Texas, Tuesday, May 24, 2022. (Uvalde Consolidated Independent School District/Austin American-Statesman via AP)

“This has been the most unprofessional investigation or handling of it that I’ve ever seen in my life,” Uvalde Mayor Don McLaughlin said in an interview with The Associated Press. “These families get blindsided constantly.”

Two officers approach the classrooms minutes after the gunman enters, then run back amid the sounds of gunfire.

As the gunman first approaches the classrooms a child whose image is blurred can be seen poking their head around a corner down the hallway and then running back while shots ring out. Later, about 20 minutes before police breach the room, the video shows a man wearing a vest that says “sheriff” use a hand sanitizer dispenser mounted on the wall.

Throughout the video, the screams of children are redacted.

Officials said the 77 minutes of footage they are preparing to release this weekend does not contain images of children in the classroom. Rep. Dustin Burrows, a Republican who is leading the investigation, said after the video was posted by the Statesman that “watching the entire segment of law enforcement’s response, or lack thereof, is also important.”

State authorities have cast Arredondo as the on-scene commander and said his errors delayed police killing the gunman. Arredondo, however, has told the Texas Tribune he didn’t consider himself to be in charge of operations and that he assumed someone else had taken control of the law enforcement response. He did not have a police radio at the time. 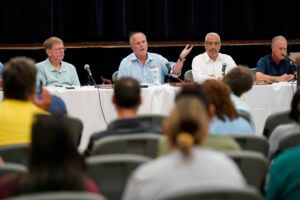 The roles of the ranking on-scene officers from other agencies, including the Texas Department of Public Safety, remain unclear. McLaughlin has accused DPS of minimizing its involvement in the response and releasing inaccurate timelines.

Last week, a critique of the police response written by tactical experts and requested by DPS alleged that a Uvalde police officer had a chance to open fire on the gunman before he entered the school. McLaughlin has said that account was inaccurate.

“All they keep doing is piling missed facts on missed facts, and throwing it out there and see what sticks,” McLaughlin said.

In a statement, DPS Director Steve McCraw said the video provides “horrifying evidence” that the law enforcement response was a failure. 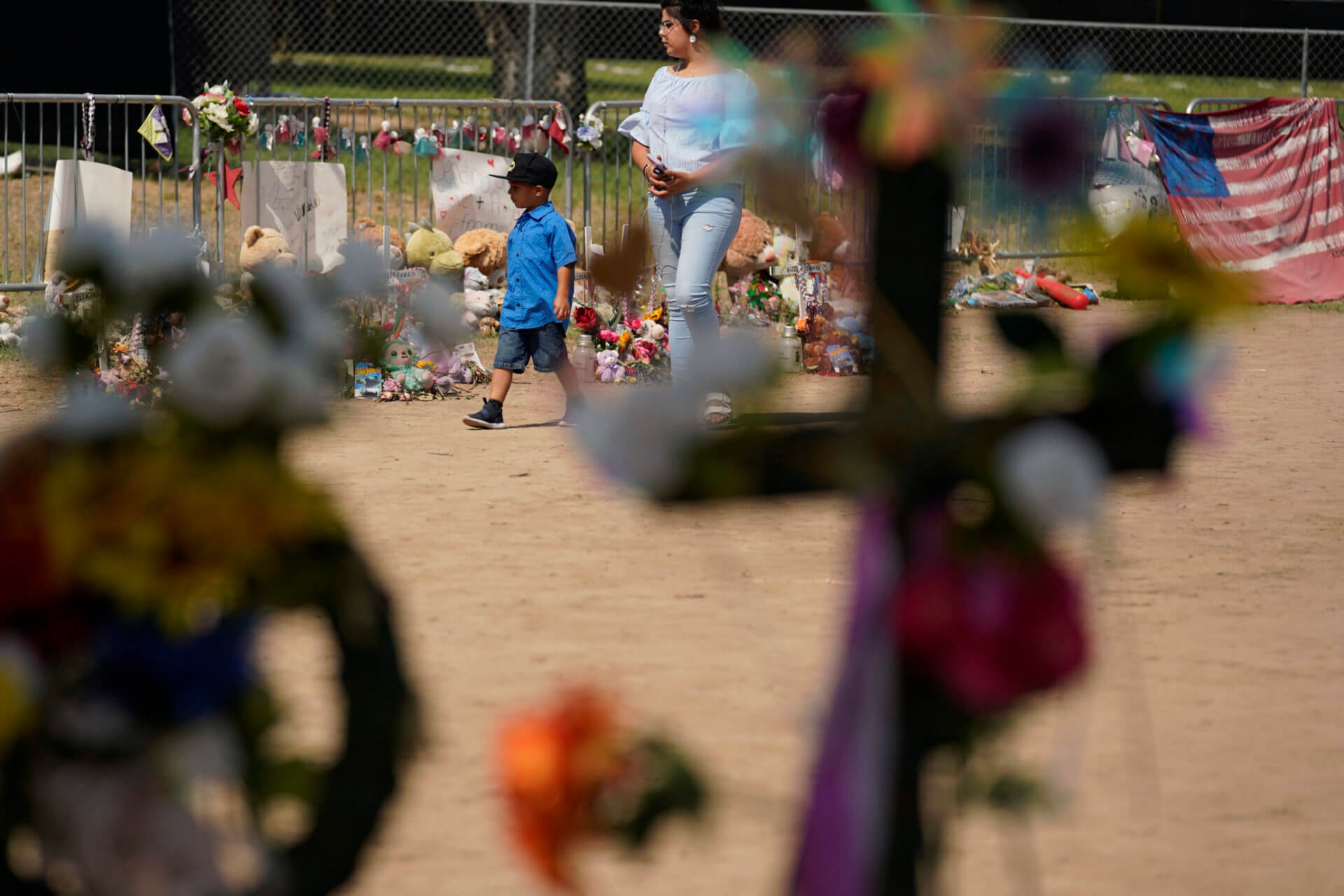 Visitors walk past a makeshift memorial honoring those recently killed at Robb Elementary School, Tuesday, July 12, 2022, in Uvalde, Texas. A Texas lawmaker says surveillance video from the school hallway where police waited as a gunman opened fire in a fourth-grade classroom will be shown this weekend to residents of Uvalde. (AP Photo/Eric Gay)
MORE NEWS