PETERSBURG, Va. (WTVR) — Takesha Jones has been searching for answers the past five-and-a-half years after her son was murdered.

“I want them to go to jail and suffer like my son suffered when they shot him. My son died. I want their insides to die. Take them from their kids, you can’t do nothing but sit in there and rot. That’s what I want to happen to all of them because it’s not just one, it’s more than one,” Jones said. 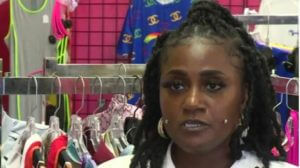 Corby Powell was just 22 when he died. He was shot and killed in the early hours of October 1, 2016 in Petersburg, Virginia — about 20 miles south of Richmond.

His mother says that the trauma has haunted her every day since.

“I struggle every day, every day about my son’s murder. This is what I know. My son was a happy person. He didn’t get into fights. He just liked to laugh, dress, joke and have a lot of girlfriends,” Jones said.

His mom believes that his love for women may be a clue in his murder.

The Petersburg Police Department confirms that Corby’s case is classified as cold.

However, his mom is hopeful that someone will have the heart to give information that will finally bring some closure and justice.

“I’m just sitting here hoping and praying that somebody will have a heart and speak up. Like say something, I mean, come on. He was a child, really, that didn’t get to experience life. Now his life is gone and y’all out here living like it didn’t happen, but my son is gone!”

His mom has opened up a clothing store and cleaning service in her son’s name, saying her grief would eat her alive if she doesn’t stay busy.

Anyone with information on Corby’s murder is asked to call Petersburg’s anonymous tip line at (804) 861-1212.