NEW YORK (AP) — In the third week of testimony at Harvey Weinstein’s rape trial, the prosecution rested, the defendant dozed off and there was the most intense testimony yet, with jurors being sent home early one day after a key accuser started sobbing uncontrollably.

After several witnesses described explicit details of Weinstein’s anatomy, jurors Tuesday were shown nude photographs of him that authorities took after his 2018 arrest.

Prosecutors appeared to be using the images to corroborate testimony that Weinstein had “extreme scarring” on his body, as well as specific details about his genitalia that came up in witness testimony.

The images were meant to be seen only by the jury and weren’t projected in court or passed out to the media. Nevertheless, some courtroom sketch artists using binoculars were able to get a gander at the photos and incorporated them into their renderings.

It was among several notable moments and odd twists in court this week.

In the most dramatic moment of the trial so far, a key accuser broke down in tears on the witness stand, ending court early Monday as a defense lawyer grilled her about her complex relationship with Weinstein.

The woman, now 34, said she tried to make Weinstein “my pseudo father,” and sent him flattering emails and kept seeing him after an alleged rape in 2013 because “I wanted him to believe I wasn’t a threat.”

She became emotional while reading an email passage about her having been abused earlier in her life. Sobbing as she left the courtroom, her cries could be heard from a nearby witness room.

The woman returned after about a 10-minute break but couldn’t continue. She wept loudly, resting her head on the witness stand and blotting tears with a tissue as a prosecutor tried to calm her.

When she returned on Tuesday, the woman was more subdued. She turned to the jury and defiantly declared: “He is my rapist.”

The charges against Weinstein involve the woman’s rape allegation as well as an allegation that he forcibly performed oral sex on a different woman in 2006. Weinstein, 67, has insisted that any sexual encounters were consensual.

The Associated Press has a policy of not publishing the names of sexual assault accusers without their consent. It is withholding the name of the rape accuser because it isn’t clear if she wishes to be identified publicly.

Weinstein appeared to be asleep at times in court this week. On Monday, during emotional testimony from the woman he is charged with raping, he was seen with his eyes closed and his head drooped as he sat in a chair at the defense table.

As he left the courtroom, a reporter asked Weinstein why he was sleeping. He turned, scowled at her and said: “Oh please.”

The New York Post later reported that Weinstein hosted a Super Bowl party for his supporters the night before, offering a possible explanation for his fatigue.

Weinstein’s spokesman said the party was “a small get-together to say thank you” and that guests included his lawyers and a couple of friends.

A juror also nodded off for a spell during Monday’s testimony, leading to a scolding from the judge.

Weinstein lawyer Donna Rotunno came under fire on social media and in court Friday for a podcast interview in which she blamed victims for getting sexual assaulted. Rotunno told The New York Times’ “The Daily” she’d never been attacked “because I would never put myself in that position.”

Kenidra Woods, a teen mental health advocate, tweeted that the lawyer’s comments were “beyond sickening.”

Stephanie Fisher, a social media director at Save the Children, tweeted that her Alexa device suddenly shut off in the middle of the interview, quipping, “I guess even she doesn’t think this horrible woman deserves to have a public voice.”

By lunchtime, Rotunno’s name was trending on Twitter in the U.S.

In court, prosecutor Joan Illuzzi-Orbon questioned the timing of the interview and rebuked Rotunno for “calling our witnesses liars.”

“That was taped a long time ago,” Rotunno interrupted, claiming that she hadn’t talked to anyone in the media since the case began.

She was later contradicted by a Times spokeswoman, who told reporters the interview was recorded on Jan. 28 — five days after opening statements and the start of testimony.

In another part of the interview, conducted by Meghan Twohey — half of the Times’ duo that recounted their reporting on Weinstein in the book “She Said” — Rotunno said Weinstein is “ well aware of the fact that his life is on the line here” and that he “deserves to have a voice out there.” 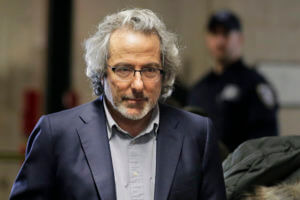 The defense scrapped plans to call to the witness stand a Hollywood writer and director who, it turns out, also wrote a #MeToo-themed episode of “Law & Order: Special Victims Unit” based on the Weinstein saga.

Warren Leight showed up to the courthouse Thursday, but the first witness ran long and his planned testimony about directing one of Weinstein’s rape accusers in a movie in the early 1990s was bumped back to Friday. That’s when Weinstein’s lawyers decided to ditch him.

Leight was expected to be asked about actress Annabella Sciorra’s behavior on the set of the 1993 romantic comedy “The Night We Never Met,” where she’s acknowledged she was hooked on Valium.

Sciorra, now 59, alleges Weinstein barged into her apartment and raped her in late 1993 or early 1994, long after shooting wrapped up. Testifying last week, she rebuffed defense suggestions she was on the drug during the alleged raped, saying she’d weaned herself off by then.

Leight, a top producer on “SUV,” wrote the Weinstein-inspired episode, “I’m Going to Make You a Star,” for this season’s premiere in September.

In a People magazine interview, Leight took a shot at the legal strategy employed by people like Weinstein, saying: “The first thing these guys do is get women attorneys who don’t seem to worry at all about who they’re defending.”

‘DONT ADDRESS HIM BY HIS REAL NAME’

Spilling another big secret of Weinstein’s celebrity life, prosecutors revealed that the “Pulp Fiction” producer used Max Poster — derived from his father’s first name and mother’s maiden name — as an alias when checking into hotels.

Weinstein used the same fake name at his other Beverly Hills home away from home, the Peninsula, and at the DoubleTree in midtown Manhattan.

A note in the DoubleTree’s reservation system alerted employees to Poster’s true identity. “CELEBRITY HARVEY WEINSTEIN IS THE ACTUAL GUEST,” it said. Another note in the system warned: ”DONT ADDRESS HIM BY HIS REAL NAME.”

The Montage is also where model Lauren Marie Young testified this week that Weinstein lured her to his hotel room in February 2013, under the pretense of a career discussion, stripped off his clothes, groped her breast and masturbated.

A Montage executive noted it’s common for celebrities to use aliases.