Harvey Weinstein’s sexual assault trial has unfolded this month in a 15th-floor courtroom in New York, but its reverberations are being felt far beyond, as his many accusers anxiously await the outcome. 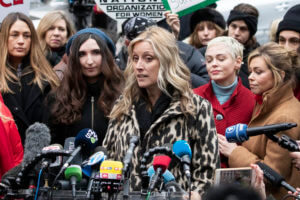 FILE – In this Jan. 6, 2020, file photo, Paula Williams, center, speaks at a news conference outside a Manhattan courthouse after Harvey Weinstein arrived in New York. Weinstein is on trial on charges of rape and sexual assault, more than two years after a torrent of women began accusing him of misconduct. (AP Photo/Mark Lennihan, File)

They wonder how the disgraced mogul’s wealth and power might affect the verdict. They wince at the way fellow accusers have been treated while testifying. They recoil at the painfully familiar descriptions of Weinstein’s behavior. And they wonder if they will ever see justice done.

The former Hollywood studio boss insists that all of his sexual encounters were consensual, and the defense has portrayed the accusers who have testified as willing partners in a transactional exchange: Weinstein wanted sex, while they wanted to get ahead in the entertainment industry. The defense attacks have been so visceral at times that one woman broke down on the stand this week, unable to continue.

As they follow the trial from afar, some of Weinstein’s accusers — those whose stories will never reach a courtroom, because of statutes of limitation — have spoken to The Associated Press about the mix of emotions they are feeling: hope, that Weinstein will be punished; fear, that he could be acquitted and regain his kingpin status in the movie business; and relief, that this case and the #MeToo movement it launched have made an indelible impact on society.

“There are many, many women who are waiting to see what happens,” said Erika Rosenbaum, who is following the trial from her home in Canada.

For Louisette Geiss, only one ending to the Weinstein saga will bring real closure: jail time.

“Otherwise, it will simply be like pulling off a scab,” the Los Angeles-based Geiss said of watching the trial unfold. “And it will send a signal to all predators: ‘You’re going to get away with it.’”

Weinstein, who amassed outsize power by producing a string of critically acclaimed, Oscar-winning films, is charged with sexually assaulting a production assistant in 2006 and raping a young actress in 2013. The charges involve just two of the scores of women who have accused him of sexual misconduct. Most of those cases are too old to prosecute. 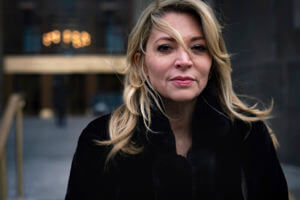 In this Jan. 27, 2020, photo, Actress Katherine Kendall poses for a portrait outside a New York courthouse where Harvey Weinstein is on trial for rape and sexual assault. Kendall claims the former movie mogul made unwanted sexual advances toward her during a meeting 1993. (AP Photo/Robert Bumsted)

Accuser Katherine Kendall sat through actress Annabella Sciorra’s cross-examination early in the trial, as the “Sopranos” actress — one of four women brought in to show Weinstein was a serial abuser — described the mogul forcing his way into her apartment and raping her in the 1990s. Kendall, at 23, had endured what she calls a terrifying night of her own at Weinstein’s apartment in New York in 1993.

Seeing Weinstein in court was wrenching.

“He’s so diminished. And it got to me, for a minute,” said Kendall, now 50, also based in Los Angeles. “But what he did to everyone got to me more. He wrecked so many women’s lives. It has to be accounted for.”

For Caitlin Dulany, following the trial online has been overwhelming. She said Weinstein exposed himself to her during the Cannes Film Festival in 1996.

“It’s very visceral. My heart will start beating and I sometimes need to take a moment,” said Dulany, who lives in Los Angeles. “While it’s very personal, there’s also a lot at stake. A conviction for any of these charges to me would give me some hope that our system is catching up with modern culture.”

Louise Godbold, who said that Weinstein sexually assaulted her after she sought an internship in 1991, isn’t sure that justice is yet available in the court system.

“But, in a global sense, justice to me is that his power and influence is taken away,” said Godbold, 57, of Los Angeles, who also watched part of Sciorra’s testimony.

FEAR OF A SETBACK

Rosenbaum, like others, fears a chilling effect on sex assault victims if Weinstein is acquitted.

“People are wondering, ‘Should I report?’” she said. “And if all these … voices can’t get (Weinstein) a day of jail time, they might think, ‘What’s the point of me telling on my uncle, telling on my coach, or the teacher who assaulted me?’”

Jasmine Lobe worries that Weinstein could return to his former perch in the industry. 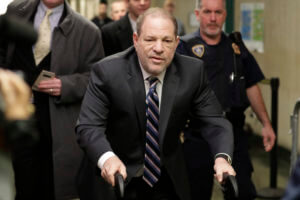 The fear isn’t just that he could go on and assault other women, said Lobe, a New York-based columnist for the Observer who said Weinstein attacked her in a hotel room in 2006. She said she also fears “that there could be friends that he has, ready to help build him up again and put him back in power.”

Geiss, too, fears that Weinstein could regain some of his clout. And that, she said, would be a setback not only for accusers like her but for the next generation of women in Hollywood and for girls like her own daughters.

“The notion that he should go back to work and have a second chance is ludicrous,” she said.

And yet, the accusers feel that whatever happens in the New York trial — and with another case pending in Los Angeles — the Weinstein saga has forever changed the cultural landscape.

“Women have spoken out and will continue to speak out,” said Rosenbaum, in Montreal. “I don’t think there’s any going back. There are too many people who believe in us and what we’re doing.”

Paula Williams was not surprised by “the underbelly of Hollywood” when she started in the film industry 30 years ago. People expected it then, she said. She spoke out about Weinstein as the #MeToo movement took root in 2017, describing a 1990 meeting at his home that ended with her running through the Hollywood Hills in heels.

She recalled apologizing as she fled. “It’s how we’re almost programmed as women,” said Williams, 50, who is following the trial from Seattle.

Geiss said that even though she would be bitterly disappointed in an acquittal, she feels “blessed that in my lifetime, we are tackling it.” She is saving magazine clippings and newspaper articles so that one day, when her daughters are older, “We’ll have the conversation, and they’ll turn to me in shock and awe that we had to go through this.”

“I mean, let’s break it down,” Geiss said. “I am literally only asking to not be asked to do a sexual act to move my career forward.” 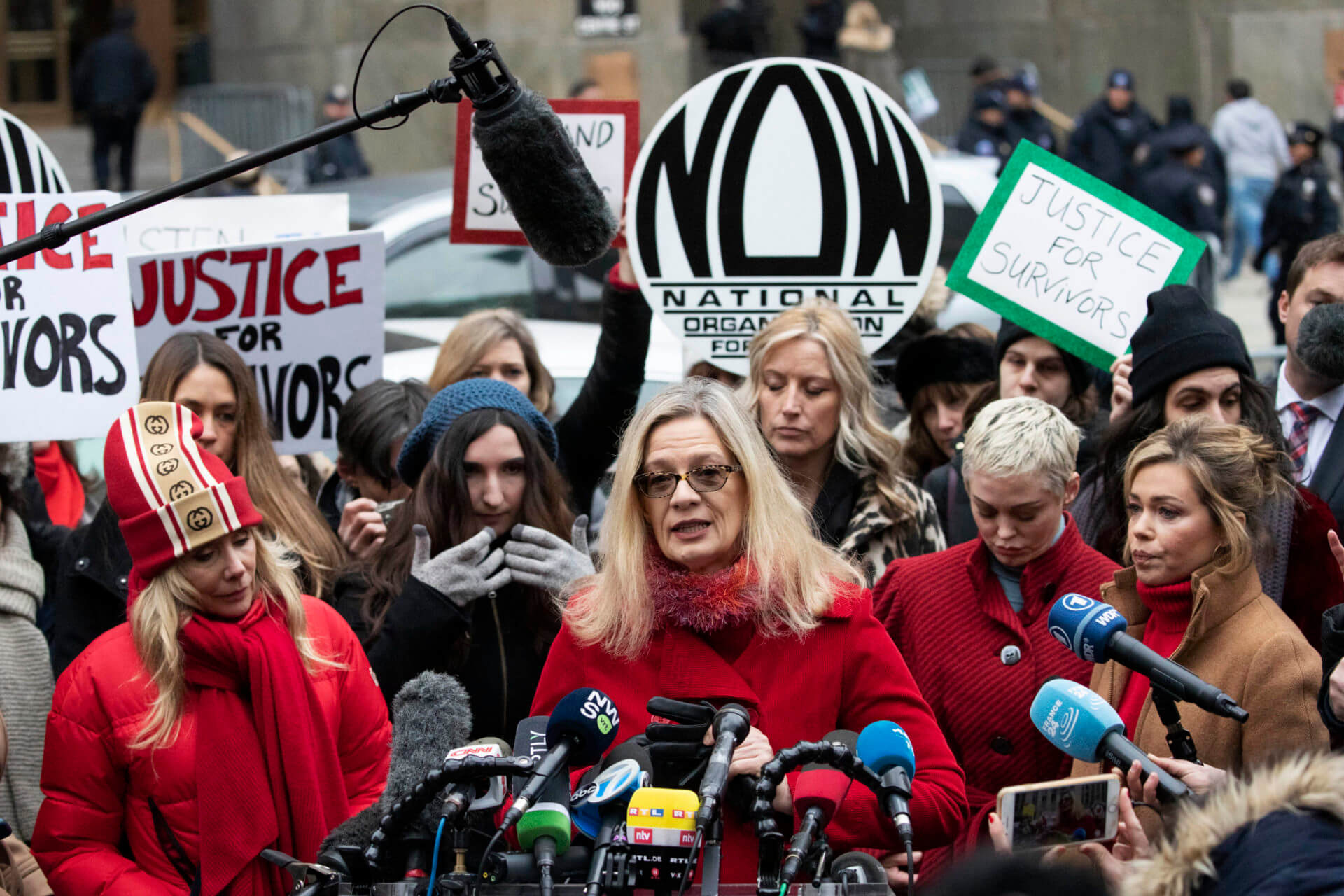 FILE - In this Jan. 6, 2020, file photo, Louise Godbold, center, speaks at a news conference outside a Manhattan courthouse after Harvey Weinstein arrived in New York. Godbold, who said that Weinstein sexually assaulted her after she sought an internship in 1991, isn't sure that justice is yet available in the court system. “But, in a global sense, justice to me is that his power and influence is taken away," Godbold said. (AP Photo/Mark Lennihan, File)
MORE NEWS