MADISON, Wis. (AP) — A Wisconsin father wants prosecutors to charge an off-duty police officer who appears to have briefly pressed his knee into his 12-year-old daughter’s neck similar to how Derek Chauvin fatally restrained George Floyd. The hold may have violated the officer’s department’s policies and a new Wisconsin law banning police chokeholds in most cases, but the ban doesn’t provide any penalties and several legal experts say charges are unlikely.

Kenosha police Officer Shawn Guetschow was working his off-duty job as a security guard at Lincoln Middle School on March 4 when Jerrel Perez’s daughter got into a lunchtime fight with another student. Surveillance video shows Guetschow rush over and separate the two.

He scuffles with Perez’s daughter, who appears to throw a punch at him. He falls to the floor and takes her down as other students crowd around. He gets on top of the girl and appears to press his knee into the back of her neck for about 25 seconds while he handcuffs her. He then hauls her to her feet and leads her off-camera. 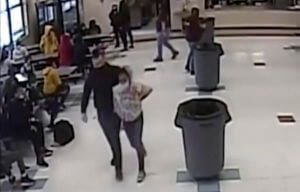 In this frame grab from surveillance video provided by the Kenosha Unified School District, an off-duty police officer escorts a 12-year-old student out of a school cafeteria following a lunchtime fight, in Kenosha, Wis., on March 4, 2022. Earlier in the video, the officer, who was working as a security guard, is shown intervening in the fight and putting his knee on the girl’s neck to restrain her. (Kenosha Unified School District via AP)

Perez has threatened to sue. He posted on Facebook a screengrab from the surveillance video next to a photo of Chauvin pressing his knee into Floyd’s neck on a Minneapolis street; Chauvin was convicted last year of murdering Floyd.

“TELL ME WHATS THE DIFFERENCE LUCKILY HE AINT KILL MY BABIE,” Perez wrote alongside the photos.

Wisconsin passed a law last summer prohibiting police from using chokeholds except as a last resort or to defend themselves, joining a host of other states that passed similar laws following Floyd’s death and the national protests that followed.

Technically, the law prohibits police departments from authorizing chokeholds in their use-of-force policies. The law doesn’t specify any penalties for violating it, though.

That means Graveley, who pressed charges in the Kyle Rittenhouse case, can’t charge Guetschow under the chokehold law. He could conceivably charge him with some other count, such as battery or assault or recklessly endangering safety, however. Graveley said Monday that no law enforcement agency had referred possible charges to his office.

Former Waukesha County District Attorney Paul Bucher said charging Guetschow would be an overreaction. He called the use of force reasonable and said the case “isn’t even remotely close to Floyd.”

“It was very short. It was to get (the girl) under control. Under the circumstances it was the fastest way to do it,” Bucher said. “I don’t expect the officer to think, ‘How’s this going to look to the media?’ It’s, ‘How do I get this subject under control as quickly as possible?'”

Julius Kim, a former Milwaukee County assistant prosecutor, said the restraint looks bad at first glance. But when a prosecutor considers the totality of the circumstances, including the dangerousness of the situation, whether some form of restraint was necessary, the amount of force used and the duration, criminal charges probably aren’t justified, he said.

“While the officer may not have used the best judgment here in terms of how he restrained this girl or how he handled the situation, in the continuum of reasonable responses, I don’t think the DA’s office will find that a crime was committed,” Kim said.

James Palmer, executive director of the Wisconsin Professional Police Association, the state’s largest police union, said officers are trained to legally restrain suspects by pressing their knee between a suspect’s neck and shoulder. He said it’s unclear from the video whether Guetschow was executing that move.

Daniel Adams, another former Milwaukee County assistant prosecutor who now works as a defense attorney, felt differently. He called the video “shocking” and Guetschow’s use of force “intolerable.”

A law enforcement office “may only use the level of physical force necessary to carry out their job,” Adams wrote in an email to The Associated Press. “Here, there was no necessity in using that level of force. … In my view, the Kenosha District Attorney has probable cause to charge Guetschow with Strangulation/Suffocation and Battery under Wisconsin’s criminal code.”

Even if Guetschow, a 36-year-old second-shift patrol officer, isn’t charged, he could face sanctions from the Kenosha Police Department, which is investigating. The agency’s use-of-force policy bars chokeholds except as a last resort and officers are required to follow policy even when they’re off-duty.

Guetschow resigned his security guard position on March 15, saying in an email to school district officials that the incident had caused mental and emotional strain on the community and his family, and that he felt the district hasn’t supported him.

District spokeswoman Tanya Ruder said the district would have no comment since the incident might lead to a lawsuit.

Efforts to reach Guetschow for comment were unsuccessful. A possible phone number for him was disconnected, and Pete Deates, president of the Kenosha police union, declined to comment when asked if Guetschow has an attorney, citing the ongoing investigation.

Graveley, the district attorney, was the prosecutor who charged Rittenhouse, an Illinois teenager, with fatally shooting two men and wounding a third during a 2020 demonstration against police brutality after a white Kenosha officer shot Jacob Blake, a Black man, in the back during a domestic dispute. Rittenhouse argued that he fired in self-defense after the men attacked him, and the jury acquitted him on all charges.