The witness recounted the comment while for the first time publicly accusing Kelly of luring her into having unwanted sex with him in 1999, when she was a struggling 17-year-old hotel worker. She was the third women to take the witness stand in federal court in Brooklyn to make allegations of sexual abuse. 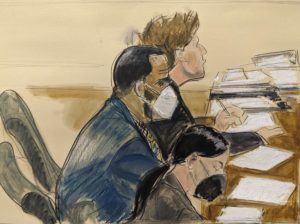 In this courtroom artist’s sketch R. Kelly, left, listens during his trial in New York, Thursday, Aug. 26, 2021. The 54-year-old Kelly has repeatedly denied accusations that he preyed on several alleged victims during a 30-year career highlighted by his mega hit “I Believe I Can Fly.” (AP Photo/Elizabeth Williams)

At one point in the relationship, she said she was at dinner with Kelly when he mentioned that he liked young girls and — “out of the blue” — brought up Lewis.

“Even look at Jerry Lee Lewis,” she claimed Kelly said. “He’s a genius and I’m a genius. We should be allowed to do whatever we want. Look at what we give to the world.”

Lewis is credited with helping create rock ‘n’ roll in the 1950s and achieving stardom with hits like “Great Balls of Fire.” But his marriage to his cousin Myra Gale Brown caused a scandal that has dogged him through the rest of his career.

Kelly, 54, has repeatedly denied accusations that he preyed on several alleged victims during a 30-year career highlighted by his 1996 mega hit “I Believe I Can Fly.” His lawyers have portrayed his accusers as groupies who are lying about their relationships with him.

The latest witness, who testified on Thursday using only her first name, described being approached at a McDonald’s in Chicago by one of Kelly’s cronies, who gave her a note asking her to call him. She and Kelly first had sex at a meeting at one of his studios, seen decorated with his platinum albums in photos shown to the jury.

Over time, “he was one of two ways,” she said: “He was either very nice and charming or he was controlling and manipulating.”

Kelly would order her to strip off her clothes and stay frozen in vulnerable sex positions before leaving her alone in the studio, sometimes for hours, she said.

As with the other alleged victims, Kelly also demanded to be called “Daddy” and sometimes would videotape the encounters, she said. That left her feeling that she needed to “stay in good standing with him to see if I could get them back.”

The abuse went on for about six months until she had to end it over feeling “humiliated” and “degraded,” she said.

“That was the lowest time of my life,” she said, through tears. “I have never been treated like that before or since.”