WINTER PARK, Fla. (AP) — Authorities in Florida have arrested a woman accused of zipping her boyfriend into a suitcase, recording his repeated cries for help and leaving him locked inside until he died, according to sheriff’s office documents.

Deputies with the Orange County Sheriff’s Office took Sarah Boone, 42, into custody on second-degree murder charges in the death of Jorge Torres Jr., 42, the agency said in a statement Tuesday.

Boone called 911 Monday afternoon from her Winter Park home and told dispatchers her boyfriend was dead, news outlets reported. Investigators said she claimed they had been drinking the night before and agreed it would be funny if Torres got into the suitcase during a game of hide-and-seek, according to an arrest affidavit from the sheriff’s office. 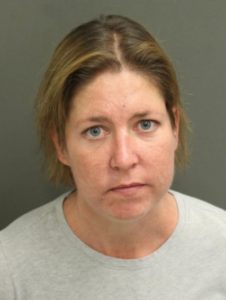 Boone reportedly admitted she zipped Torres into the suitcase, went upstairs to bed and awoke the next morning to find him still inside and unresponsive, the document alleged.

The sheriff’s office said Boone’s statements didn’t line up with video evidence found on her phone showing a blue suitcase facing downward with Torres trying to free himself. In the video, he called for help and yelled that he couldn’t breathe, deputies wrote in the affidavit.

Boone could be heard laughing and saying: “That’s what I feel like when you cheat on me,” according to the document.

Arrested: Sarah Boone, 42, for Second Degree Murder in the death of 42-year-old Jorge Torres Jr., who died after Boone zipped him into a suitcase, and didn’t return for hours. pic.twitter.com/JCHWG7WNkp