Police identified the suspect as Hend Bustami. KTNV confirmed that this is also the same woman who was arrested at Harry Reid International Airport, saying that she was detained for being “so good-looking.” 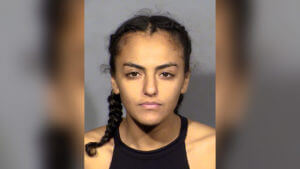 Police said they were on scene at a residence located in the 10100 block of June Flower Lane after dispatch received a call saying that someone was injured.

Arriving officers located an unresponsive adult female inside of the residence suffering from multiple lacerations. Medical personnel responded and pronounced the victim deceased at the scene.

The investigation by the LVMPD Homicide Section indicates the victim was involved in a verbal dispute with her daughter, later identified as 28-year-old Bustami.

California Highway Patrol was able to locate and detain Bustami near Barstow. Bustami will be charged with open murder and extradited back to Clark County, according to police.

The identification of the victim, as well as the cause and manner of death, will be released by the Clark County Coroner’s Office.

Anyone with any information about this incident is urged to contact the LVMPD Homicide Section by phone at 702-828-3521, or by email at homicide@lvmpd.com. To remain anonymous, contact Crime Stoppers by phone at 702-385-5555, or on the internet at www.crimestoppersofnv.com.

This story was originally published Oct. 26 by KTNV in Las Vegas, an E.W. Scripps Company.