COLUMBUS, Ohio (AP) — An Ohio woman pleaded guilty Friday to helping plan the killings of eight members of a family, becoming the second member of her own family to admit to a role in a shocking crime prosecutors say stemmed from a dispute over custody of her granddaughter.

Angela Wagner, 50, pleaded guilty in southern Ohio’s Pike County to conspiracy to commit aggravated murder, along with burglary, evidence tampering and other charges. 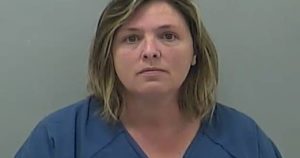 In exchange for the plea, prosecutors dropped aggravated murder charges against her and recommended that she serve a 30-year prison sentence. Her agreement to testify against other remaining defendants was also part of the deal, they said.

She didn’t make any statements during the hearing.

Her husband and their two adult sons also were charged in the 2016 slayings of seven adults and a teenage boy from the Rhoden family. Wagner’s plea comes nearly five months after her son Edward “Jake” Wagner pleaded guilty to aggravated murder and other charges and agreed to testify against the other three in a deal that would help all four avoid potential death sentences.

The fatal shootings at three trailers and a camper near Piketon in April 2016 terrified residents in a stretch of rural Ohio and launched one of the state’s most extensive criminal investigations, which led to the Wagners’ arrest more than two years later.

The Wagners spent months planning the killings and targeted some of the victims, but “some sadly were killed because they happened to be there,” said special prosecutor Angela Canepa.

Most of the victims were repeatedly shot in the head, and some showed signs of bruising. Three young children at the scenes were unharmed.

Prosecutors say the Wagner family planned the killings for months, motivated by a dispute over custody of the daughter Jake Wagner had with Hanna Rhoden.

The Wagners used guns with homemade silencers, allowing them to kill their victims as they slept, according to the prosecutors.

Angela Wagner was fully aware of the plans and bought several items used to carry out the killings, including “phone jammers” that would have prevented the victims from calling for help, Canepa said.

She also forged custody documents and monitored some of the victims’ social media accounts before the killings, Canepa said. Wagner approached prosecutors about a deal and gave them new information after her son pleaded guilty, Canepa said.

Jake Wagner pleaded guilty in April on the fifth anniversary of the slayings and said in court that he was “deeply and very sorry.” He hasn’t been sentenced, but his lawyer said he understood that he would spend his life in prison.

Christopher Rhoden Sr.’s brother, Tony Rhoden Sr., has said the family was grateful for the first plea as “some semblance of justice.”

He also has sued the Wagners. That case is pending.
___
Seewer reported from Toledo.