ATLANTA (AP) — Three people have been indicted on arson charges in the burning of the Wendy’s restaurant in Atlanta where a police officer fatally shot Rayshard Brooks in June 2020. 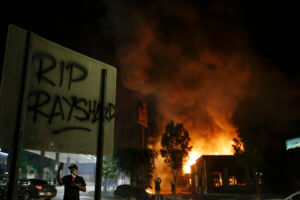 “RIP Rayshard” is spray painted on a sign as as flames engulf a Wendy’s restaurant during protests Saturday, June 13, 2020, in Atlanta. The restaurant was where Rayshard Brooks was shot and killed by police Friday evening following a struggle in the restaurant’s drive-thru line. (AP Photo/Brynn Anderson)

A Fulton County grand jury on Thursday indicted 24-year-old Chisom Kingston, 35-year-old John Wade and 31-year-old Natalie White on two counts each of first-degree arson and one count of conspiracy to commit first-degree arson. All three were previously arrested on arson charges within weeks of the fire and were released on bond.

The fast food restaurant was set on fire during a protest on June 13, 2020, the night after a police officer fatally shot Brooks.

Defense attorney Drew Findling, who represents White, said video footage his team has reviewed is “helpful towards Natalie.” The conspiracy charge is “baffling because we have absolutely no idea who these other two people are, and certainly they have no relationship with Natalie,” he said.

Khalil Eaddy, a lawyer for Kingston, said he doesn’t deny that his client was at the Wendy’s restaurant taking part in a peaceful protest, but he said Kingston is innocent of all the charges. He also said video shot at the scene “actually helps our case.”

No lawyer was listed in court records for Wade, and The Associated Press was unable to find a working telephone number for him.

Police responded on June 12, 2020, to complaints that Brooks was asleep in his car in the restaurant’s drive-thru lane. Police body camera video shows the 27-year-old Black man struggling with two white officers after they told him he’d had too much to drink to be driving and tried to arrest him. Brooks grabbed a Taser from one of the officers and fled, firing it at the other officer as he ran. An autopsy found that Brooks was shot twice in the back.

The killing came in the midst of weeks of upheaval and protest across the country in the wake of George Floyd’s death under the knee of a Minneapolis police officer.

Before he was shot, Brooks told officers three times that he had been with a girlfriend named Natalie White that night. Findling has confirmed that his client is the person Brooks was talking about but declined to comment further on their relationship, saying only that they were close.