MORROW, Ga. (AP) — Two white Atlanta police officers who clashed with Rayshard Brooks acted reasonably during the 2020 encounter that ended with the 27-year-old Black man’s fatal shooting, a specially appointed prosecutor said Tuesday in announcing his decision not to pursue charges against them.

Officer Garrett Rolfe, who shot and killed Brooks in June 2020, and Officer Devin Brosnan faced a “quickly evolving” situation when Brooks lunged and grabbed one of their Tasers during an arrest attempt, said Pete Skandalakis, executive director of the Prosecuting Attorneys’ Council of Georgia. 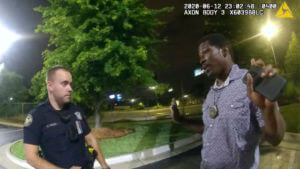 FILE – This screen grab taken from body camera video provided by the Atlanta Police Department shows Rayshard Brooks, right, as he speaks with Officer Garrett Rolfe, left, in the parking lot of a Wendy’s restaurant in Atlanta, June 12, 2020. A specially appointed prosecutor said Tuesday, Aug. 23, 2022, that he will not pursue any charges against the Atlanta police officer who fatally shot Brooks more than two years ago. (Atlanta Police Department via AP, File)

“We did not look at this with 20/20 hindsight. Given the quickly changing circumstances, was it objectively reasonable that he used deadly force? And we conclude it was,” Skandalakis said of Rolfe.

The shooting happened against the backdrop of heightened tensions and protests nationwide after the death of George Floyd under the knee of a Minneapolis police officer less than three weeks earlier. Sometimes-violent protests over Floyd’s death had largely subsided in Atlanta, but Brooks’ killing set off a new round of demonstrations against police brutality and racial injustice.

Skandalakis said he believes that context is important and acknowledged that encounters between police and the African American community are sometimes “very volatile,” but he said he doesn’t believe race played a role in this instance.

“This isn’t one of those cases,” he said. “This is a case in which the officers were willing to give Mr. Brooks every benefit of the doubt and, you know, unfortunately, by his actions, this is what happened.”

On June 12, 2020, police responded to complaints of a man sleeping in a car in the drive-thru lane of a Wendy’s restaurant. Police body camera video shows the two officers having a calm conversation with Brooks for roughly 40 minutes. 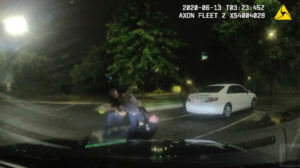 FILE – This screen grab taken from dashboard camera video provided by the Atlanta Police Department shows Rayshard Brooks, center, struggling with Officers Garrett Rolfe, left, and Devin Brosnan in the parking lot of a Wendy’s restaurant in Atlanta, June 13, 2020. A specially appointed prosecutor said Tuesday, Aug. 23, 2022, that he will not pursue any charges against the Atlanta police officer who fatally shot Brooks more than two years ago. (Atlanta Police Department via AP, File)

Then, when the officers told Brooks he’d had too much to drink to be driving and tried to arrest him, Brooks resisted in a struggle caught on dash camera video. Brooks grabbed a Taser from one of the officers and fled, firing it at Rolfe as he ran. Rolfe fired his gun, and an autopsy found that Brooks was shot twice in the back.

Police Chief Erika Shields resigned less than 24 hours after Brooks died, and protesters set fire to the Wendy’s, which was later demolished.

L. Chris Stewart, a lawyer for Brooks’ family, said Tuesday that Brooks should not have fought with the officers and that if they had used deadly force during that fight, they would have been completely justified.

He and his law partner, Justin Miller, noted that the prosecutors said they had to hire experts and break down the encounter video frame by video frame to reach a decision. Something that complicated should have been left to a jury of Fulton County citizens to decide at trial, the family’s lawyers said.

Stewart said the family will continue its fight for justice in civil court, where they have a lawsuit pending.

The two officers’ lawyers have said their actions were justified.

“This was the proper and only decision that could be reached based upon the evidence and Georgia law,” Brosnan attorneys Don Samuel and Amanda Clark Palmer said in an emailed statement.

Lawyers Noah H. Pines, Bill Thomas and Lance LoRusso said Rolfe will not be making a statement at this point.

Skandalakis and former Gwinnett County District Attorney Danny Porter, who was co-counsel in the case, spent about an hour during the news conference walking through the details of the encounter between Brooks and the two officers. Porter showed still images taken from videos to break down what happened once things turned violent.

Skandalakis called it “a peaceful encounter that all of a sudden becomes a violent encounter,” saying that once Brooks took the Taser from Brosnan, he assumed an offensive position.

Porter said Brooks proceeded to “beat the crap” out of the two officers after Rolfe’s lawful attempt to arrest him. Rolfe acted in accordance with Georgia law and Atlanta Police Department policy given the facts of the situation, he said.

“The police didn’t come into this encounter hot,” he said. “There was no hostility.”

Rolfe was fired a day after the shooting, but his dismissal was overturned in May 2021 by the Atlanta Civil Service Board. The board found that the city failed to follow its own procedures for disciplinary actions.

Skandalakis said Tuesday that he would file paperwork to dismiss those warrants. He declined to comment when asked whether Howard had rushed charges.

The Atlanta Police Department said in a statement that both officers are on administrative duty and will undergo training and recertification.

Atlanta Mayor Andre Dickens, who was a City Council member when the shooting happened, said in a statement his “heart continues to ache” for Brooks’ family, but he respects the “independent role” that the special prosecutor played.

Two months after he announced the charges, Howard lost the Democratic primary in his bid for reelection. Just weeks after taking office in January 2021, his successor, Fani Willis, asked Georgia Attorney General Chris Carr to reassign the case, citing concerns about Howard’s actions.

Willis has since gained national attention for her ongoing investigation into whether former President Donald Trump and others illegally tried to influence the outcome of the 2020 election in Georgia.

Carr initially refused to reassign the case, but in July 2021 appointed Skandalakis to take it over after a judge excused Willis and her office.