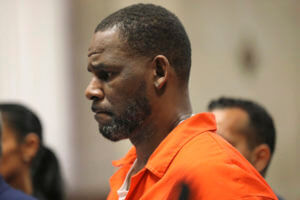 FILE – In this Sept. 17, 2019, file photo, R. Kelly appears during a hearing at the Leighton Criminal Courthouse in Chicago.(Antonio Perez/Chicago Tribune via AP, Pool, File)

NEW YORK (AP) — R. Kelly can remain behind bars awaiting multiple trials on child pornography and other charges in three states, an appeals court in New York said Tuesday as a lawyer for the R&B singer cited another inmate’s attack on Kelly last month as one reason he should receive bail.

The 2nd U.S. Circuit Court of Appeals in Manhattan upheld a decision by a Brooklyn federal judge to deny bail to Kelly, 53, who remains in a federal jail in Chicago.

He faces state and federal charges in Illinois, Minnesota and New York ranging from sexual assault to heading a racketeering scheme designed to supply him with girls.

The Grammy Award-winning singer has denied ever abusing anyone.

Prosecutors have said Kelly is a danger to the community and a flight risk. The 2nd Circuit said prosecutors had proven both and that “no condition or combination of conditions could assure against those risks.” The appeals court said the lower court also did not err in finding Kelly failed to demonstrate a “compelling reason” for temporary release.

Mike Leonard, one of Kelly’s attorneys, said the appeals ruling was “very disappointing and somewhat surprising” because appeals judges during oral arguments had seemed to understand that Kelly’s incarceration was preventing him from preparing adequately for trial.

In a court filing in Chicago federal court Friday, Leonard wrote that Kelly sustained unspecified injuries when he was attacked at the Metropolitan Correctional Center in Chicago in late August by another inmate.

The lawyer also entered into the court file for Kelly’s case a handwritten letter from the inmate who says he attacked Kelly immediately after meeting with a mental health professional who screamed for him to return to their discussion as the inmate instead refused and attacked Kelly.

Leonard alleged that the incident proved that the federal jail cannot protect his client behind bars and that he should be granted bail. A bail application is pending in Chicago, though the 2nd Circuit ruling would keep him behind bars even if he won bail in Illinois.

A message for comment was left with the federal Bureau of Prisons.Thomas Farinella, another lawyer for Kelly, said that for Kelly, “The so-called maxim of the presumption of innocence appears to be a misnomer.”

He added: “We will continue to vigorously fight for Mr. Kelly’s vindication.”