NEW YORK (AP) — An appeals court should overturn the U.S. conspiracy conviction of notorious Mexican drug lord Joaquin “El Chapo” Guzman because of claims that his anonymous jury flouted warnings to avoid media accounts of the case, a lawyer for Guzman urged a three-judge panel on Monday, catching the attention of at least one judge.

In oral arguments before the 2nd U.S. Circuit Court of Appeals in New York, attorney Marc Fernich cited a news report that during deliberations jurors were exposed to salacious claims that were barred from the trial, including that Guzman sexually abused girls he referred to as “vitamins” that gave him energy. 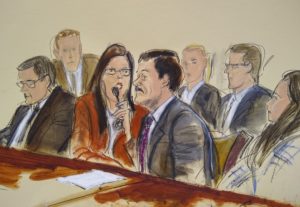 FILE – In this July 17, 2019 file photo of a courtroom sketch, Joaquin “El Chapo” Guzman, second from right, listens to his sentence via interpreter while surrounded by U.S. Marshals and flanked by his defense attorney Marc Fernich, during his sentencing in federal court in New York. Lawyers for the Mexican drug kingpin, who was convicted in February 2019 on multiple conspiracy counts in an epic drug-trafficking case and was sentenced to life behind bars in a U.S. prison, are appealing on Oct. 25, 2021 in hopes of overturning his life sentence. (Elizabeth Williams via AP, File)

Fernich argued the court should order a new trial or at least call for a hearing on the alleged jury misconduct. He asked the judges to resist any “punitive impulse” toward someone who was cast as a “public enemy” like gangster Al Capone.

“The guy is going to be in a box for the rest of his life,” Fernich said. “I’m not asking you to play violins for him. This is his last shot.”

The legal claims resonated with Circuit Judge Gerard E. Lynch, who said it was “a not bad argument.”

“This is serious stuff,” the judge later added.

Assistant U.S. Attorney Hiral Mehta argued the lower court was right to reject the defense request for a hearing on the jury issue because there was no valid evidence of misconduct. He said the Vice News report — based on a post-conviction interview with a juror who wasn’t named — amounted to “hearsay and double hearsay.”

Guzman was sentenced in 2019 to life behind bars for a massive drug conspiracy that spread murder and mayhem for more than two decades.

Before the federal case, he had attained near-mythical status by escaping from prison twice in Mexico, the second time through a tunnel dug into the shower of his cell. He was recaptured and sent in 2017 to the United States and put in solitary confinement.

At trial, Guzman’s lawyers argued he was the fall guy for other kingpins who were better at paying off top Mexican politicians and law enforcement officials to protect them.

The judges, while sounding open to the arguments about potential juror prejudice, showed less patience with another claim that Guzman’s defense was unfairly hindered by the strict terms of confinement that were imposed in response to his reputation as an escape artist.

Lynch challenged Fernich’s characterization that Guzman was thrown into a “modern dungeon,” pointing out that his lawyers had constant access to him leading up to the trial.

“He’s not isolated from the world,” Lynch said. “He’s seeing people on a regular basis.”

The panel will rule at a later date.