PHILADELPHIA (AP) — A pair of socks helped lead to an arrest in the killing of a Pennsylvania woman nearly 30 years ago, authorities said. 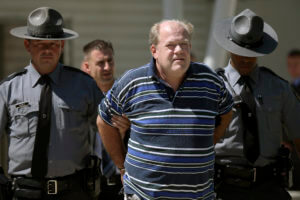 In this Tuesday, Sept. 3, 2019 photo, Pennsylvania state troopers lead Theodore Dill Donahue out of the Pennsylvania State Police Troop K barracks in West Philadelphia after arresting him as a suspect in the 1991 murder of Denise Sharon Kulb. (Tim Tai/The Philadelphia Inquirer via AP)

Philadelphia prosecutors and state police announced the arrest of Theodore Dill Donahue, now 52, on charges of murder and other counts in the 1991 death of his 27-year-old girlfriend, Denise Sharon Kulb. State police made the arrest Tuesday following a reexamination of the case, which began in 2015.

Kulb’s body was found Nov. 12, 1991, in a wooded area of an undeveloped cul-de-sac in a residential community about 25 miles (40 kilometers) southwest of Philadelphia. Authorities believe the body was moved there after Kulb was murdered.

Kulb was a mother, daughter, sister and friend who “deserved far better than to be killed and left in a location unknown to those who mourned her,” District Attorney Larry Krasner said.

Authorities say the case was built on new investigative tools, including photo-enhancing technology that connected a pair of separated socks, one of which was found on the body.

Prosecutors said Donahue originally told state police he last saw the victim in October 1991 when they bought and used crack, were robbed at knifepoint and she ran to get help. 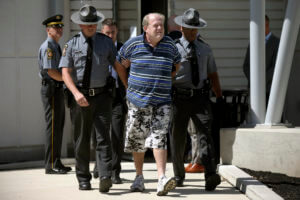 But in 2015, prosecutors said, he said he last saw Kulb outside a bar the same day. Family members said she was last seen the following day at a funeral, and her sister said the victim got into a fight with Donahue outside a bar. Phone records indicated Donahue and Kulb spoke before they met on that day, the last day the victim was seen alive.

Donahue ignored reporters’ questions as he was taken to a police vehicle Tuesday.

“He’s not guilty. He denies the charges, and we will dispute it in court,” defense attorney R. Emmett Madden said during a brief phone conversation, The Philadelphia Inquirer reported . 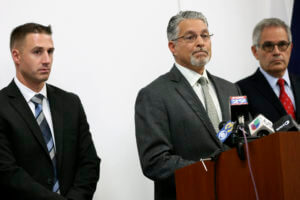 Anthony Voci, supervisor of the district attorney’s homicide unit, said he was confident the passage of time will not hamper his office’s chances of winning a conviction against Donahue, who is charged with murder, abuse of a corpse, evidence tampering, obstruction and false reports to police.

“Sometimes cases get better with time, just like wine does,” he said, according to the Inquirer. “For instance, in 1991 we didn’t have multiple versions of his last interactions with the victim. Now we do. So that’s one example of how cases can get better.”