ROCHESTER HILLS, Mich. (AP) — A Michigan judge declined Monday to move the 15-year-old charged with killing four students at Oxford High School out of an adult jail, but she agreed that the jail needs to ensure the boy can’t hear or see grown-up inmates.

Ethan Crumbley’s attorney, Paulette Loftin, argued during his probable cause conference in Rochester Hills District Court that her client should be moved back to a juvenile facility, saying that he “should not be considered a menace to other juveniles.”

“This is someone who has never been in trouble before,” Loftin said. “This is not someone who has a history of assaulting kids his age or any other negative contact with his peers. This one isolated incident is all that we’re looking at here today.” 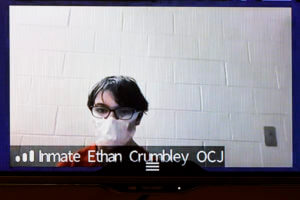 Ethan Crumbley appears on video from the Oakland County Jail at 52nd District Court in Rochester Hills, Mich., Monday, Dec. 13, 2021. Crumbley, 15, is charged as an adult with murder, terrorism and other counts for the Nov. 30 shooting at Oxford High School, about 30 miles (50 kilometers) north of Detroit. (AP Photo/Paul Sancya)

But District Judge Nancy Carniak sided with Assistant Oakland County Prosecutor Marc Keast, who countered that the nature of the charges and security risks mandate that Crumbley be held in an adult facility. Crumbley is charged as an adult with killing four classmates and injuring seven other people in the Nov. 30 shooting at Oxford High School, about 30 miles (50 kilometers) north of Detroit.

“This cannot be compared to any other case that this court or any other court in this county has seen before, and calling this an isolated incident quite frankly does not do it justice,” Keast said. “This was a mass murder at a school, judge. This was planned. it was pre-meditated. The defendant didn’t just attack other individuals, he targeted juveniles.”

Keast said he would contact the jail after Monday’s hearing and “make sure that the defendant is neither within sight nor sound of any adult at the jail.”

Carniak adjourned the probable cause hearing to Jan. 7 to review witness statements and other evidence from prosecutors and investigators. At that time, she could make a decision on whether to order a competency exam for him if such an exam is requested by his attorneys. 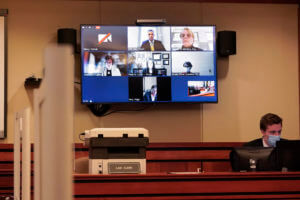 Ethan Crumbley appears on video from the Oakland County Jail at 52nd District Court in Rochester Hills, Mich., Monday, Dec. 13, 2021. Crumbley’s probable cause conference Monday was adjourned to Jan. 7 to allow his lawyers to review witness statements and other evidence. (AP Photo/Paul Sancya)

Monday’s conference was a procedural hearing to prepare for a Dec. 20 preliminary hearing, which also will be moved to a later date.

Crumbley’s parents, James and Jennifer Crumbley, also being held at the jail, are accused of failing to intervene on the day of the tragedy and are charged with involuntary manslaughter. They face hearings Tuesday.

The morning of the shooting, school officials met with Ethan Crumbley and his parents at the school after a teacher found a drawing of a gun, a bullet and a person who appeared to have been shot, along with messages stating, “My life is useless” and “The world is dead.”

The school district’s superintendent has said the Crumbleys “flatly refused” to take their son home.

The gun used in the shooting also was bought days before by James Crumbley and their son had full access to it, prosecutors said.