NEW YORK (AP) — The man accused of shooting 10 people on a Brooklyn subway train was arrested Wednesday and charged with a federal terrorism offense after the suspect himself called police to come get him, law enforcement officials said.

Frank R. James, 62, was taken into custody about 30 hours after the carnage on a rush-hour train, which left five victims in critical condition and people around the city on edge.

“My fellow New Yorkers, we got him,” Mayor Eric Adams said.

James was awaiting arraignment on a charge that pertains to terrorist or other violent attacks against mass transit systems and carries a sentence of up to life in prison, Brooklyn U.S. Attorney Breon Peace said.

In recent months, James railed in online videos about racism and violence in the U.S. and about his experiences with mental health care in New York City, and he had criticized Adams’ policies on mental health and subway safety. But the motive for the subway attack remains unclear, and there is no indication that James had ties to terror organizations, international or otherwise, Peace said.

It wasn’t immediately clear whether James, who is from New York but has lived recently in Philadelphia and Milwaukee, has an attorney or anyone else who can speak for him. A sign taped to the door of James’ Milwaukee apartment asks that all mail be delivered to a post office box.

James, in a blue t-shirt and brown pants with his hands cuffed behind his back, didn’t respond to reporters shouting questions as police escorted him to a car a few hours after his arrest. 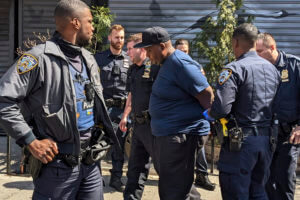 Police had launched a massive effort to find him, releasing his name and issuing cellphone alerts.

They got a tip Wednesday that he was in a McDonald’s in Manhattan’s East Village neighborhood, Chief of Department Kenneth Corey said.

The tipster was James, and he told authorities to come and get him, two law enforcement officials said. They weren’t authorized to discuss the ongoing investigation and spoke on condition of anonymity.

James was gone when officers arrived, but they soon spotted him on a busy corner nearby.

Four police cars zoomed around a corner, officers leaped out and, soon, a compliant James was in handcuffs as a crowd of people looked on, witness Aleksei Korobow said.

“There was nowhere left for him to run,” she said.

The day before, James set off smoke grenades in a commuter-packed subway car and then fired at least 33 shots with a 9 mm handgun, police said. 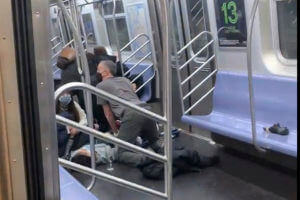 This photo provided by Will B Wylde, a person is aided in a subway car in the Brooklyn borough of New York, Tuesday, April 12, 2022. A gunman filled a rush-hour subway train with smoke and shot multiple people Tuesday, leaving wounded commuters bleeding on a Brooklyn platform as others ran screaming, authorities said. Police were still searching for the suspect. (Will B Wylde via AP)

Police Chief of Detectives James Essig said police were told that after James opened one of the smoke grenades, a rider asked, “What did you do?”

“Oops,” James said, then went on to brandish his gun and open fire, according to a witness account.

At least a dozen people who escaped gunshot wounds were treated for smoke inhalation and other injuries.

As terrified riders fled the attack, James apparently hopped another train — the same one many were steered to for safety, police said. He got out at the next station, disappearing into the nation’s most populous city.

The shooter left behind numerous clues, including the gun, ammunition magazines, a hatchet, smoke grenades, gasoline and the key to a U-Haul van. That key led investigators to James.

Federal investigators determined the gun used in the shooting was purchased by James at a pawn shop — a licensed firearms dealer — in the Columbus, Ohio, area in 2011. 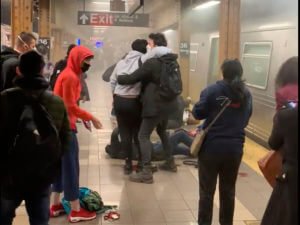 This photo provided by Will B Wylde, a person is aided outside a subway car in the Brooklyn borough of New York, Tuesday, April 12, 2022. A gunman filled a rush-hour subway train with smoke and shot multiple people Tuesday, leaving wounded commuters bleeding on a Brooklyn platform as others ran screaming, authorities said. Police were still searching for the suspect. (Will B Wylde via AP)

The van was found, unoccupied, near a station where investigators determined the gunman had entered the subway system. No explosives or firearms were found in the van, a law enforcement official who wasn’t authorized to comment on the investigation and did so on the condition of anonymity told The Associated Press. Police did find other items, including pillows, suggesting he may have been sleeping or planned to sleep in the van, the official said.

Investigators believe James drove up from Philadelphia on Monday and have reviewed surveillance video showing a man matching his physical description coming out of the van early Tuesday morning, the official said. Other video shows James entering a subway station in Brooklyn with a large bag, the official said.

In addition to analyzing financial and telephone records connected to James, investigators were reviewing hours of rambling, profanity-filled videos James posted on YouTube and other social media platforms as they tried to discern a motive.

In one video, posted a day before the attack, James, who is Black, criticizes crime against Black people and says drastic action is needed.

“You got kids going in here now taking machine guns and mowing down innocent people,” James says. “It’s not going to get better until we make it better,” he said, adding that he thought things would only change if certain people were “stomped, kicked and tortured” out of their “comfort zone.”

In another video he says, “this nation was born in violence, it’s kept alive by violence or the threat thereof and it’s going to die a violent death. There’s nothing going to stop that.”

His posts are replete with violent language and bigoted comments, some against Black people.

Several of James’ videos mention New York’s subways. A Feb. 20 video says the mayor and governor’s plan to address homelessness and safety in the subway system “is doomed for failure” and refers to himself as a “victim” of the city’s mental health programs. A Jan. 25 video criticizes Adams’ plan to end gun violence.

The Brooklyn subway station where passengers fled the smoke-filled train in the attack was open as usual Wednesday morning, less than 24 hours after the violence.

Commuter Jude Jacques, who takes the D train to his job as a fire safety director some two blocks from the shooting scene, said he prays every morning but had a special request on Wednesday.

“I said, ‘God, everything is in your hands,'” Jacques said. “I was antsy, and you can imagine why. Everybody is scared because it just happened.”
___
Balsamo reported from Washington. Associated Press writers Jim Mustian, Beatrice Dupuy, Karen Matthews, Julie Walker, Deepti Hajela, Michelle L. Price and David Porter in New York contributed to this report, and Michael Kunzelman contributed from College Park, Maryland. 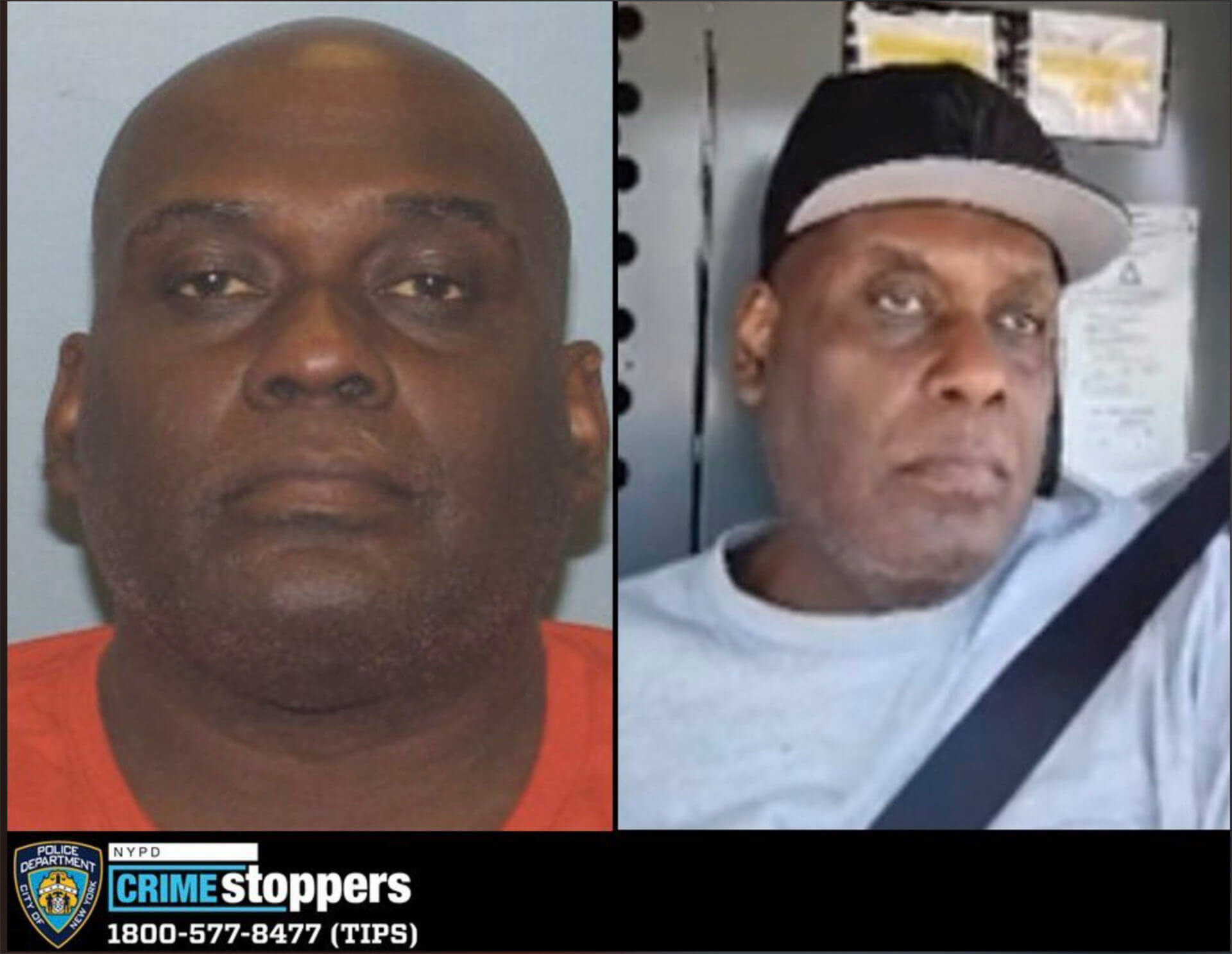 This image provided by the New York City Police Department shows a Crime Stoppers bulletin displaying photos of Frank R. James, who has been identified by police as the renter of a U-Haul van possibly connected to the Brooklyn subway shooting, in New York, Tuesday, April 12, 2022. Mayor Eric Adams said Wednesday, April 13, that officials were now seeking James as a suspect. (Courtesy of NYPD via AP)
MORE NEWS