WALTHAM, Mass. (AP) — F. Lee Bailey, the celebrity attorney who defended O.J. Simpson, Patricia Hearst and the alleged Boston Strangler, but whose legal career halted when he was disbarred in two states, has died, a former colleague said Thursday. He was 87.

Bailey died at a hospital in the Atlanta area, according to Kenneth Fishman, Bailey’s former law partner who went on to become a Superior Court judge in Massachusetts.

Fishman did not disclose the cause of death but said Bailey had moved to Georgia about a year ago to be closer to one of his sons and had been dealing with several medical issues for the past few months.

“In many respects, he was the model of what a criminal defense attorney should be in terms of preparation and investigation,” said Fishman, whose legal association and friendship with Bailey date back to 1975.

In a career that lasted more than four decades, Bailey was seen as arrogant, egocentric and contemptuous of authority. But he was also acknowledged as bold, brilliant, meticulous and tireless in the defense of his clients.

“The legal profession is a business with a tremendous collection of egos,” Bailey said in an interview with U.S. News and World Report in September 1981. “Few people who are not strong egotistically gravitate to it.”

Some of Bailey’s other high-profile clients included Dr. Samuel Sheppard — accused of killing his wife — and Capt. Ernest Medina, charged in connection with the My Lai massacre during the Vietnam War.

Bailey, an avid pilot, best-selling author and television show host, was a member of the legal “dream team” that defended Simpson, the former star NFL running back and actor acquitted on charges that he killed his wife, Nicole Brown Simpson, and her friend, Ron Goldman, in 1995.

In a tweet Thursday, Simpson said, “I lost a great one. F Lee Bailey you will be missed.”

Bailey was the most valuable member of the team, Simpson said in a 1996 story in The Boston Globe Magazine. 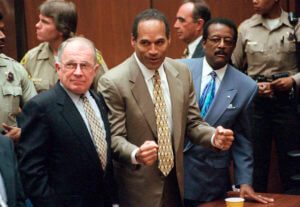 FILE – In this Oct. 3, 1995, file photo, O.J. Simpson reacts as he is found not guilty in the death of his ex-wife Nicole Brown Simpson and her friend Ron Goldman in Los Angeles, as defense attorneys F. Lee Bailey, left, and Johnnie L. Cochran Jr., stand with him. Bailey, the celebrity attorney who defended O.J. Simpson, Patricia Hearst and the alleged Boston Strangler, but whose legal career halted when he was disbarred in two states, has died, a former colleague confirmed Thursday, June 3, 2021. He was 87. (Myung J. Chun/Los Angeles Daily News via AP, Pool, File)

One of the most memorable moments of the trial came when Bailey cross-examined Los Angeles police Detective Mark Fuhrman in an attempt to portray him as a racist whose goal was to frame Simpson. It was classic Bailey.

Even though Fuhrman remained cool under pressure, and some legal experts called the confrontation a draw, Bailey, recalling the exchange months later, said, “That was the day Fuhrman dug his own grave.”

Bailey’s latest book, “The Truth About the O.J. Simpson Trial: By The Architect of the Defense,” was being released this month.

Bailey earned acquittals for many of his clients, but he also lost cases, most notably Hearst’s.

Hearst, a publishing heiress, was kidnapped by the Symbionese Liberation Army terrorist group on Feb. 4, 1974, and participated in armed robberies with the group. At trial, Bailey claimed she was coerced into participating because she feared for her life. She still was convicted.

Hearst called Bailey an “ineffective counsel” who reduced the trial to “a mockery, a farce, and a sham,” in a declaration she signed with a motion to reduce her sentence. Hearst accused him of sacrificing her defense in an effort to get a book deal about the case.

She was released in January 1979 after President Jimmy Carter commuted her sentence.

Bailey made his name as the attorney for Sheppard, an Ohio osteopath convicted in 1954 of murdering his wife.

Sheppard spent more than a decade behind bars before the U.S. Supreme Court ruled in a landmark 1966 decision that “massive, pervasive, prejudicial publicity” had violated his rights. Bailey helped win an acquittal at a second trial.

Bailey also defended Albert DeSalvo, the man who claimed responsibility for the Boston Strangler murders between 1962 and 1964. DeSalvo confessed to the slayings, but was never tried or convicted, and later recanted. Despite doubts thrown on DeSalvo’s claim, Bailey always maintained that DeSalvo was the strangler.

Throughout his career, Bailey antagonized authorities with his sometimes abrasive style and his quest for publicity. He was censured by a Massachusetts judge in 1970 for “his philosophy of extreme egocentricity,” and was disbarred for a year in New Jersey in 1971 for talking publicly about a case.

But publicity was part of his strategy, Fishman said.

“Enjoying the public eye became a tool for him,” Fishman said. “He was one of the first lawyers to go outside the courtroom and talk in front of a bunch of microphones. All the news about a case was from the prosecution’s side. So his strategy was to get out there and throw doubt on all the criminal charges.” 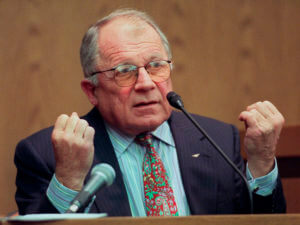 FILE – In this Monday, Feb. 14, 2000, file photo, F. Lee Bailey testifies during cross examination in the third trial of Dr. Sam Sheppard in Cleveland. Bailey, the celebrity attorney who defended O.J. Simpson, Patricia Hearst and the alleged Boston Strangler, but whose legal career halted when he was disbarred in two states, has died, a former colleague confirmed Thursday, June 3, 2021. He was 87. (David I. Andersen/The Plain Dealer via AP, Pool)

Bailey was disbarred in Florida in 2001 and the next year in Massachusetts for the way he handled millions of dollars in stock owned by a convicted drug smuggler in 1994. He spent almost six weeks in federal prison charged with contempt of court in 1996 after refusing to turn over the stock. The experience left him “embittered.”

He passed the bar exam in Maine in 2013, but was denied the right to practice by the state’s highest court, which concluded that he had not demonstrated that he understood the seriousness of his actions that led to his disbarment in the other states.

Francis Lee Bailey was born in the Boston suburb of Waltham, the son of a newspaper advertising man and a schoolteacher.

He enrolled at Harvard University in 1950 but left at the end of his sophomore year to train to become a Marine pilot. He retained a lifelong love of flying and even owned his own aviation company.

While in the military, Bailey volunteered for the legal staff at the Cherry Point Marine Corps Air Station in North Carolina, and soon found himself the legal officer for more than 2,000 men.

Bailey earned a law degree from Boston University in 1960, where he had a 90.5 average, but he graduated without honors because he refused to join the Law Review. He said the university waived the requirement for an undergraduate degree because of his military legal experience.

Bailey was married four times and divorced three. His fourth wife, Patricia, died in 1999. He had three children. 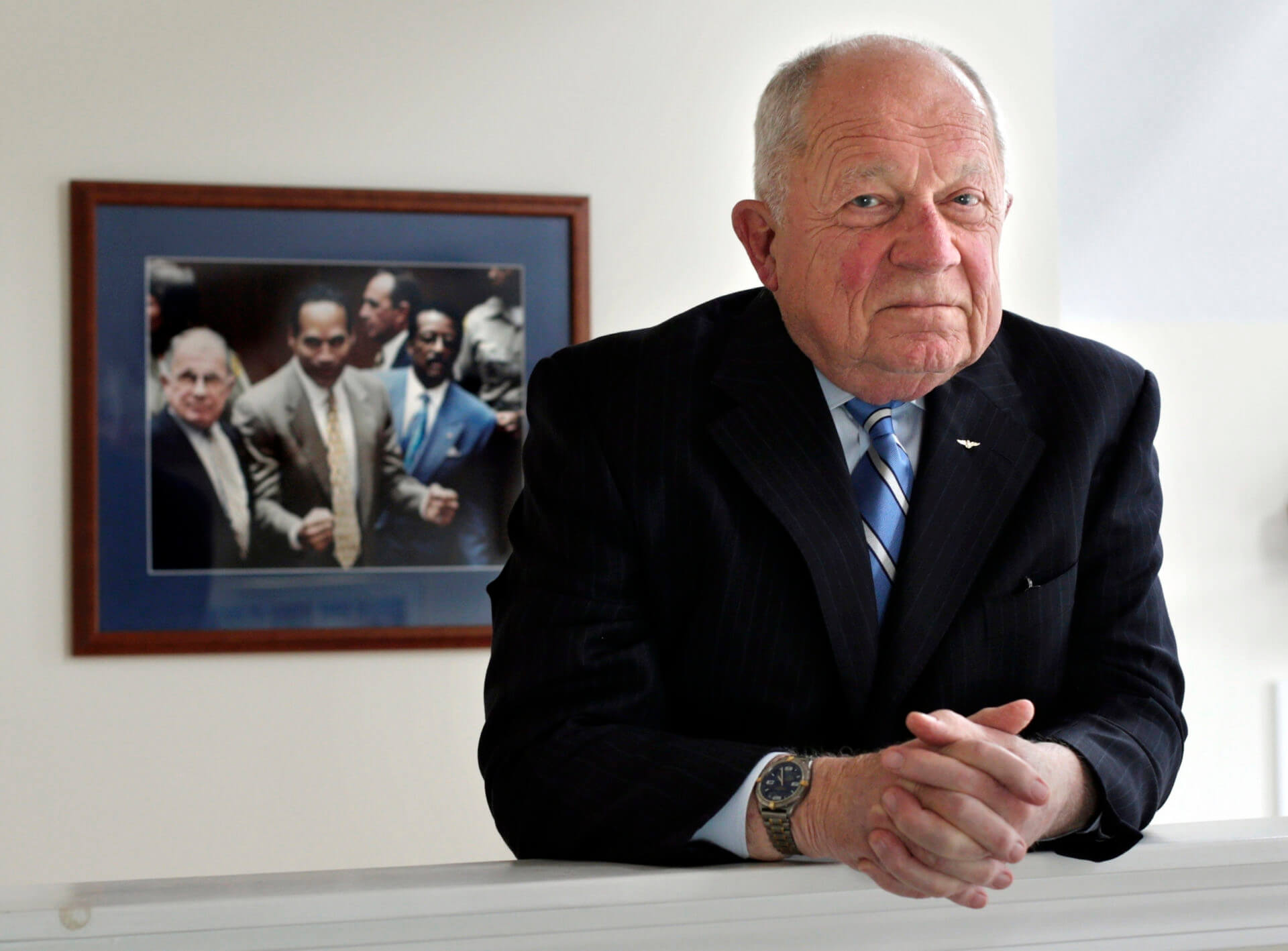 FILE - In this May 22, 2014, file photo, famed defense attorney F. Lee Bailey poses in his office in Yarmouth, Maine. Bailey, the celebrity attorney who defended O.J. Simpson, Patricia Hearst and the alleged Boston Strangler, but whose legal career halted when he was disbarred in two states, has died, a former colleague confirmed Thursday, June 3, 2021. He was 87. (AP Photo/Robert F. Bukaty, File)
MORE NEWS

5 years’ prison for Florida man in arson at racial protest

Officers Testify At First Hearing Of The House Jan. 6 Investigation