TALLAHASSEE (WTXL) — From inside the Leon County Detention Facility, Charlie Adelson made his first appearance before a Leon County judge Tuesday.

Charlie Adelson was booked into the jail on April 25 for murder charges relating to the death of FSU law professor Dan Markel.

Because of state law, a bond isn’t possible for certain charges including a first-degree murder, which Adelson faces. His attorneys however are now working to change that.

Adelson is facing charges of first-degree murder, conspiracy to commit murder and solicitation of murder in connection to the murder of Markel.

While his team hoped to bond him out, that didn’t happen due to his first-degree murder charge. It’s a decision that his attorney Margot Moss said they’ll fight.

“We will be filing a motion for Arthur hearing shortly,” Moss said in court Tuesday. “We understand the charges he has right now are no bondable offenses, but we will be filing to rectify that in the future.”

Criminal Defense Attorney Don Pumphrey explained that an Arthur hearing is requested when someone is charged with an offense that comes with an automatic no bond.

“A person is presumed innocent until proven guilty. In the Arthur hearing, there are just certain cases where the person has to petition and the judge has to hear the evidence,” Pumphrey said. “Basically, the state is going to put on their evidence to show that the proof is evident and the presumption is great.”

According to The Associated Press, it’s alleged that Adelson arranged the killing so his sister could move back to the Fort Lauderdale area from Tallahassee with her two children. 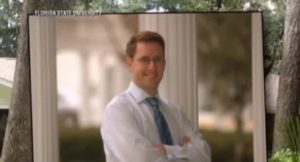 Prosecutors said an undercover FBI recording of Adelson and Katherine Magbanua discussing what to do if a cop approaches them is the proof that Adelson was involved in Markel’s murder. It’s the video that a grand jury also reviewed before moving to indict him.

Katherine Magbanua’s defense team filed a motion to dismiss that video from her upcoming retrial in Markel’s murder after a hung jury in her 2019 trial. The defense said the video shouldn’t be used because it doesn’t show the full conversation and some parts are still hard to hear.

His attorneys argued that line and other lines in the tape prove their client is innocent.

Adelson’s attorneys still have to formally file the motion to have an Arthur hearing.

This story was originally published April 26 by WTXL in Tallahassee, an E.W. Scripps Company.