INDIANAPOLIS (WRTV) — It’s not the answer Amanda Walterman was hoping for: Indiana State Police will not open a new investigation into her mother’s 2010 death.

Amanda submitted her request in November 2021 under a new law, Senate Enrolled Act 177, which allows families to request Indiana State Police do a new investigation into an uncharged death.

Amanda’s mother, Julia Henemyre, was found in a snowbank near South Keystone Avenue and Werges Avenue and later died at a hospital on Dec. 18, 2010.

Julia’s death was ruled an accident, but her daughter, Amanda, believes someone caused her death.

Her mom was found topless in a pool of blood.

The autopsy report revealed multiple blunt force injuries to Julia’s face and body, including a swollen lip and hemorrhages to the head.

“She had what I would call defensive marks up and down her arms and two different head injuries,” Amanda said.

In an Aug. 31 letter to Amanda, ISP denied Amanda’s request saying the circumstances surrounding Julia’s death do not meet the criteria to conduct a new investigation, however, it does not specify which criteria were not met.

So far, Indiana State Police has reviewed 15 of the 40 requests and has declined to open a new investigation in all 15 cases.

Capt. Ron Galaviz emphasized Indiana State Police has spent and is spending a lot of time and effort to review each request.

“There has been at least one case in which ISP offered its assistance to the original investigating agency, and that agency has accepted said offer,” Galaviz said. “There are just over 25 requests remaining which still need to be reviewed and please know that each of these reviews do not occur in a vacuum. They are thoroughly vetted and countless hours of interviews, review of evidence and interaction with investigating agencies and witnesses go into each of these requests.”

Amanda says she was hopeful SEA 177 would give her answers regarding her mother’s death.

“I am disappointed and disheartened that the Indiana State Police took nearly a year to rule that my mom’s case did not meet the criteria for re-investigation,” Amanda said. “It is frustrating to continually hear that no agency can or will give this case the attention that it deserves, and it’s upsetting to know that the men who were very likely responsible for her death will never even be questioned by investigators. It’s especially frustrating to know that this investigation was never taken seriously from the start.”

Amanda said her mom struggled with substance use.

“To the police, Julie Henemyre was an addict and a felon,” Amanda said. “She was also my mother and she was, above all else, a human being whose life mattered and whose death deserved a proper investigation.”

“I wasn’t in a very good mood because my flight had been delayed,” Amanda said. “I didn’t know that was going to be the last time I ever spoke to her.” 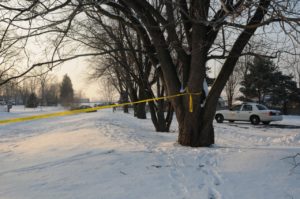 The next day, Amanda learned her mom was found unresponsive in a snowbank and taken to the hospital as a Jane Doe where she died.

Julia’s death appeared on local news including WRTV as a death investigation.

Julia’s death was later ruled an accident, and the cause of death was listed as hypothermia.

When her mom died, Amanda was just 22 years old.

“I had it in my head that it was just a drunken accident,” Amanda said. “She had fallen down in the snow.”

But as Amanda got older, she wanted to learn more about her mom including how she died.

She obtained copies of the autopsy report and photos, the death investigation report and crime scene photos.

“I just want to know what happened,” Amanda said.

IMPD’s death investigation report says Julia’s boyfriend was found with blood on his face in the driver’s seat of a car. 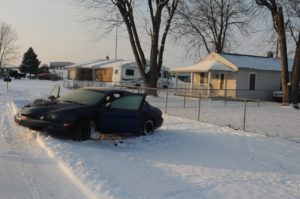 Amanda says the car was her mother’s.

“From the pictures, it looks like her car was backed into a fence,” Amanda said. “So, I don’t know if that was her or if that was the boyfriend. I know the boyfriend was found sleeping in the car.”

The death investigation report says Julia was at a party when she took her top off and refused to leave.

Someone at the party told police he punched her in the face, and pushed Julia and the boyfriend out of the house.

“I think somebody followed her,” Amanda said. “I have a theory that someone hit her in the head, knocked her down and left her there.”

IMPD interviewed people from the party, but no arrests were ever made.

ISP has a dedicated investigator who reviews cases, as well as a six-person advisory board that makes recommendations to ISP Superintendent Doug Carter.

SEA 177 requires families to submit a request in writing to the superintendent of Indiana State Police explaining why they have a reasonable suspicion why the death was the result of a criminal act.

The family also has to notify local police and the prosecutor that they’re requesting an ISP investigation.

The new law applies only to uncharged deaths and does not apply if the loved one was under the care of a doctor or the death was the result of medical malpractice.

Indiana State Senator Mark Messmer, R-Jasper, said he drafted the legislation for SEA 177 after a Southern Indiana family contacted him because they felt the local sheriff mishandled the investigation into their loved one’s death.

“The family felt like they just did not have any options,” Messmer said. “They came to me last year and said ‘we just feel like we’ve exhausted all of our avenues.’”

This story was originally published Sept. 22, 2022 by WRTV in Indianapolis, an E.W. Scripps Company.