The second day of the trial in Boston Municipal Court resumed with testimony from a friend of the woman who says the former Food Network star kissed and groped her while she attempted to take a selfie at a Boston bar in 2017.

The defense didn’t call any witnesses and Batali did not testify in his defense. Lawyers are expected to deliver their closing arguments later Tuesday and the case will be handed to the judge for a verdict.

In an unusual move, Batali waived his right to a jury trial when the proceedings opened Monday. 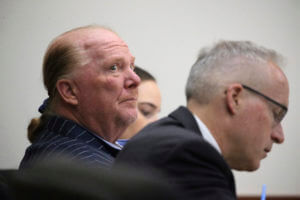 But Batali’s lawyer sought to discredit her, arguing that the assault never happened.

He said the accuser has a financial incentive to lie as she’s seeking more than $50,000 in damages from Batali in a separate civil lawsuit.

Batali, who pleaded not guilty to indecent assault and battery in 2019, could face up to 2 1/2 years in jail and be required to register as a sex offender if convicted.

The 61-year-old, who was once a fixture on shows like “Molto Mario” and “Iron Chef America,” is among a number of high-profile men who have faced a public reckoning during the #MeToo social movement against sexual abuse and harassment in recent years.