Weinstein’s lawyers called six witness as they sought to cast doubt on the accounts of the women who have accused Weinstein of raping or sexually assaulting them. 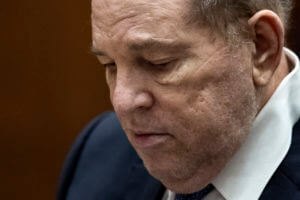 Defense witnesses included a firefighter and a former security guard who testified that a false fire alarm went off at a Los Angeles hotel around the time an Italian model and actor alleges Weinstein raped her in her room in February of 2013.

The accuser, who went by the name Jane Doe 1 during the trial, made no mention of the alarm in her testimony, though prosecutors established in their cross-examination of the guard that it may not have been heard on her floor.

One Weinstein accuser returned to the stand Wednesday to provide evidence that she was in Puerto Rico and worked as a dancer on a film produced by Weinstein’s company Miramax, “Dirty Dancing: Havana Nights.”

The woman, known in court as Ashley M., was brought back by the prosecution as a rebuttal witness after the defense called the choreographer from the film to testify that she had no memory of working with her.

Ashley M. testified that call sheets from the film and pay stubs prove she was there. She has accused Weinstein of sexually assaulting her in a hotel room during the shooting of the film in 2003.

The allegations are not part of the charges against Weinstein. Ashley M. and three others gave accounts of sexual assaults by Weinstein to show he had a pattern of such acts.

The Associated Press does not typically name people who say they have been sexually abused.

Prosecutors are set to start closing arguments in the afternoon after nearly five weeks of testimony at the Los Angeles trial. The defense will give its closing argument Thursday.

Jurors will be tasked with deciding on two counts of rape and five other counts of sexual assault dating from 2005 to 2013 and involving four women.

Weinstein has pleaded not guilty. His attorneys have said, and are likely to argue in their closing, that two of the women had consensual sex for career advancement with the former movie mogul, who was then among Hollywood’s most powerful men. The attorneys have said the encounters with the other two women didn’t happen at all.