STOCKTON, Calif. (AP) — A man suspected of killing six men and wounding a woman in a series of shootings in Northern California has a criminal history that includes traffic violations and convictions for drug crimes, authorities said Monday.

Stockton police arrested Wesley Brownlee, 43, on Saturday after surveilling him as he drove through the streets of the city, armed with a handgun and possibly “out hunting” for another victim, police said.

In January 1999, Brownlee had been sentenced to two years in prison in Alameda County, which encompasses the city of Oakland, for possessing and selling a controlled substance, the California corrections department said. He was released on parole in August 1999 after serving seven months.

Brownlee was again convicted in Alameda County in December 2001 and sentenced to three years for the same crime. He was released to parole in May 2003 and discharged from parole three years later.

Prosecutors in San Joaquin County, which includes Stockton, were working Monday with the city’s police department to review the evidence and expect to file charges Tuesday, said Elisa Bubak, a spokesperson for the prosecutor’s office.

It was not immediately known if Brownlee has an attorney who can comment on his behalf.

Court documents show he was first arrested at age 15 in Alameda County on suspicion of selling crack cocaine and was placed on house arrest, The East Bay Times reported.

In 1997, at age 18, Brownlee was arrested again and charged with possessing crack cocaine and was sentenced to a three-year probation term. His probation was revoked a year later after he sold cocaine to an undercover police officer, and in 1999 he was sentenced to two years in state prison and sent to San Quentin, the newspaper reported. 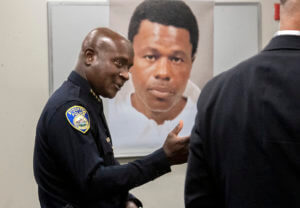 Stockton Police Chief Stanley McFadden speaks during a press conference at the Stockton Police Department headquarters in Stockton, Calif., on the arrest of suspect Wesley Brownlee in the Stockton serial killings on Saturday, Oct. 15, 2022. Behind McFadden is a booking photo of Brownlee. (Clifford Oto/The Record via AP)

Brownlee grew up in Oakland just six blocks from where the Oakland victim was killed, the East Bay Times reported, citing court records. All of the Stockton killings happened near addresses listed for Brownlee and his relatives, KXTV-TV reported.

Investigators have said ballistics tests and video evidence linked the crimes. A police photo showed the black and gray weapon allegedly carried by the suspect. It appeared to be a semi-automatic handgun containing some nonmetallic materials.

Police said after Brownlee’s arrest that he was dressed in black, had a mask around his neck and a handgun, and was possibly searching for another victim when he was arrested driving around Stockton, where five men were ambushed and shot to death between July 8 and Sept. 27. Four of the victims were walking, and one was in a parked car.

Police believe the same shooter was responsible for the April 2021 killing in Oakland, some 70 miles (110 kilometers) away, and for wounding the woman in Stockton a week later.

At Saturday’s news conference, a moment of silence was held for the victims.

After receiving hundreds of tips, investigators located and watched the place where Brownlee was living. They observed his patterns, determined he was out searching for another victim and arrested him, authorities said.

Police said some victims were homeless, but not all. None were beaten or robbed, and the woman who survived said her attacker didn’t say anything.