TAMPA, Fla. (AP) — A detective in Florida investigating the disappearance of Carole Baskin’s second husband said Thursday that the “Tiger King” star had three times refused requests for interviews, and that the probe was ongoing.

Cpl. Moises Garcia of the Hillsborough County Sheriff’s Office in Tampa held a news conference to provide an update on the investigation into Don Lewis’ disappearance. The case was reopened following the March 2020 release of “Tiger King: Murder, Mayhem and Madness,” a Netflix documentary series which became a huge hit during the pandemic. 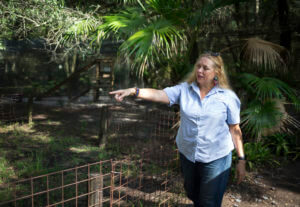 FILE – In this July 20, 2017, file photo, Carole Baskin, founder of Big Cat Rescue, walks the property near Tampa, Fla. A detective in Florida investigating the disappearance of the former husband of Baskin said Thursday, Nov. 18, 2021, that the “Tiger King” star had three times refused requests for interviews, and that the probe was ongoing.(Loren Elliott/Tampa Bay Times via AP, File)

Lewis was a Tampa millionaire who vanished in 1997, leaving Baskin with dozens of big cats at their animal sanctuary. The series launched rumors about how Lewis disappeared, including conjecture that he was buried in a septic tank on the sanctuary’s property or living in Costa Rica.

The detective said he and his investigators had conducted 50 interviews and followed up on 200 leads.

When asked about the Costa Rica rumor, Garcia refused to comment, but he said federal agents had run down leads in the Central American country. Getting a search warrant for the animal sanctuary to follow up on the septic tank rumor would require probable cause, either evidence showing something happened on the property or a witness who could testify to that effect, he said.

Besides Baskin, a former handyman at the sanctuary, Kenny Farr, also “didn’t interview with us,” the detective said.

It’s unusual for a spouse or relative to refuse to cooperate when a family member goes missing, and Baskin is a person of interest, though others are too, Garcia said.

Baskin said Thursday in an email to The Associated Press that she has referred Garcia to her attorney. She pointed out she did everything she possibly could to assist detectives after Lewis’ disappearance, including interviews, continued correspondence and unfettered access to the Big Cat Rescue property.

“There is nothing that I know that is not either in the Sheriff’s files or in the diary I have published at SaveTheCats.org,” Baskin said. “And no way I am going to have a clearer memory, or anything to add, twenty-four years later.”

In response to a question on Reddit this week, Baskin wrote that she believed that Lewis took off in a small experimental airplane that crashed into the Gulf of Mexico.

“He wasn’t licensed to fly, yet did all the time. He couldn’t file a flight plan and had to take off from closed airports to evade detection,” Baskin said. “I think this was the most likely scenario.”

Baskin recently sued Netflix and a production company to try to prevent the use of interviews and footage involving her in the “Tiger King” sequel, which was released Wednesday. Netflix countered that Baskin and her husband agreed in writing that the material could be used in the future and that she is trying to block the company’s First Amendment right to free speech.

Garcia said he is confident Lewis’ disappearance will be solved.

“If you ask a homicide detective if he can solve a case, and he says no, you should take away his badge,” he said.