OMAHA, Neb. (Court TV) —The obstetrician who reported unlicensed midwife Angela Hock for trying to perform an in-home breech delivery walked back her claim that the infant’s death could have been prevented if the mother was brought to the hospital sooner.

Dr. Katherine Lessman of the University of Nebraska Medical Center in Omaha conceded that no outcome is guaranteed in childbirth. But she stood by her decision to report Hock for her involvement in the breech birth of Vera Noe, who died two days after her mother gave birth to her in an ambulance outside the hospital.

Lessman said she and her colleagues decided it was their responsibility as mandatory reporters to share their concerns with authorities so they could investigate if Hock committed a crime. Lessman failed to give a direct answer when asked what crime she suspected Hock of committing or which standard of care she violated.

Defense attorney Hermine Hayes-Klein, a Washington-based attorney who specializes in family law and reproductive rights, referred to Lessman’s December 2022 deposition and statements to police to clarify her position. In her deposition, Lessman said Hock’s crime was coercing Emily Noe into staying home and assuring her she had the necessary skills and resources to deliver a breech baby when Noe would have been better served at the hospital. Such conduct amounted to practicing without a license, Lessman said in the deposition. But Hock is charged with child abuse resulting in death and not practicing without a license. 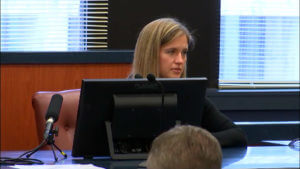 Lessman agreed with the defense lawyer that there’s nothing illegal about a woman choosing to give birth at home or rejecting a doctor’s advice to have a Cesarean birth in a hospital, the method Lessman said she would have suggested when the baby presented as breech. Lessman said Emily and Crayton Noe told her they decided to proceed with a home birth under Hock’s care because the birth of their first daughter in a hospital had been traumatic and they trusted Hock, who assured them she could handle an in-home vaginal breech birth.

On the witness stand, Lessman tried to soften her stance. “I’m saying breech birth is a contraindication to home births and it deserved more attention.” Lessman insisted she was not “accusing” Hock of a crime, but rather “calling attention” to concerns she had about her handling of the birth — chiefly, Hock’s decision to perform an episiotomy, or make a cut in the tissue between the vaginal opening and the anus known as the perineum to help the child breate and create space for Hock to intervene.

Lessman conceded she had no reason to doubt Hock made the incision in an attempt to save the baby. But the doctor insisted the outcome of the baby’s death spoke to Hock’s incompetence and negligence.

Under questioning by Deputy Douglas County Attorney Amy Jacobsen, Lessman said Hock’s offer to deliver a breech baby vaginally despite the risk of suffocation and entrapment to Vera called into question Hock’s judgment. Ultimately, it’s the mother’s decision, Lessman said, adding that such decisions should be made after discussing the risks with a care provider. 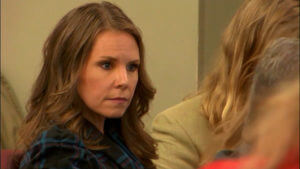 Crayton Noe, the child’s father, testified Monday that he and his wife spoke to Hock about their options for about three minutes before deciding to stay home.

Emily Noe’s uterine scar from her first C-section put her and her child at an even greater risk of injury, Lessman testified. In a hospital, they could have monitored Noe and jumped into action faster with tools including forceps and surgical shears, tools Hock did not have at her disposal, leaving her to work with trauma shears typically used for cutting apart clothes.

Firefighter Matt Carroll, who responded to the 911 call to the Noe home with his partner, provided Hock with the trauma shears. Carroll said Hock appeared to be a “professional” who was taking appropriate steps to deliver the baby, which is why they didn’t interfere with her. But he questioned her use of surgical shears, suggesting that a scalpel might be more effective. Hock turned down the offer.

Lessman agreed with Hock’s decision to use shears instead of a scalpel for the episiotomy, saying it was safer for the baby.

Angela Hock is facing a bench trial for a felony charge of negligent child abuse resulting in death.